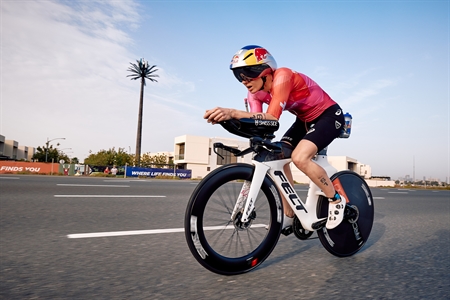 The Bahrain Endurance 13 has launched into its 2022 season at Ironman 70.3 Dubai, racing in a stacked field as a test of fitness for Daniela Ryf, David Plese, and Kristian Blummenfelt.

Ryf took silver to knock off the rust. The swift Swiss battled head-to-head with eventual winner Laura Philipp, but edged her German opponent to lead off the bike. On the run Philipp pulled away to claim the win, but Ryf held strong to clinch second place.

“Big respect for Laura Philipp who was the more complete athlete today deciding the battle on the run finishing in the world’s best time over the 70.3 distance,” said Ryf. “I am happy with my performance. I am finally feeling healthy again and have some power back on the bike. Leading a 2:04:24 on 90 kilometers is a nice feedback that the indoor sessions and aero work are paying off.”

While Blummenfelt did not have the day he hoped for finishing 10th, he made no excuses, saying even before he suffered a flat tire he was already off the pace from the beginning. Plese had a better day, finishing in 8th place.

Now that these athletes have blown off the cobwebs, they can calibrate their next moves building into the major events of the year. There’s nowhere to go but onward and upward.