Blummenfelt caps off 2021 with another victory, Luis takes second at Indian Wells 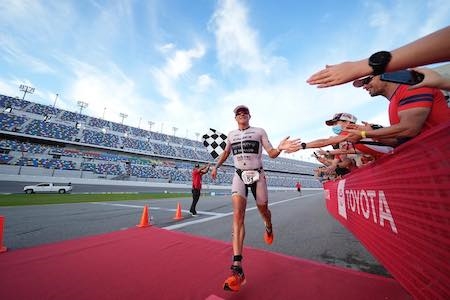 It was a gold and silver weekend for Bahrain Endurance 13 with Kristian Blummenfelt and Vincent Luis racing over the middle distance in Florida and California.

Blummenfelt capped an amazing season by winning Clash Daytona with a speedy 3:08:30 on the 2-kilometer swim, 80-kilometer bike, and 18-kilometer run on the Daytona International Speedway circuit. The Norwegian backed up his Ironman win in Cozumel last week and took home a $15,000 prize check to add to his Olympic and world champion accolades.

He exited the swim in fourth, but rode steadily into the second spot by 12 kilometers into the bike leg. Despite being overtaken by Magnus Ditlev and coming into the bike-to-run transition with a 2:23 deficit, Blummenfelt still had more firepower to unleash on the run. He made the pass for the lead shortly after the 10-kilometer mark and never looked back.

Luis took second place at Ironman 70.3 Indian Wells La Quinta the following day, securing qualification for the 2022 Ironman 70.3 World Championship. It was an eventful race: the French athlete was leading the race on the bike when traffic control directed the lead car off course, and a car hit Luis. Bloodied and bruised, he still finished the 90-kilometer bike leg and ran a gutsy half-marathon to clinch silver.

“I swam well and was pushing good watts,” said Luis. “With 10 kilometers to go I still had a two-minute lead, but then a car hit me and I hit the ground really hard. Jumped back on my bike and reached T2 with Lionel Sanders. My run was just a struggle and my only goal was to reach the finish line and have a check up with a doctor.”

The two races wrap up the Bahrain Endurance 13 season for 2021.