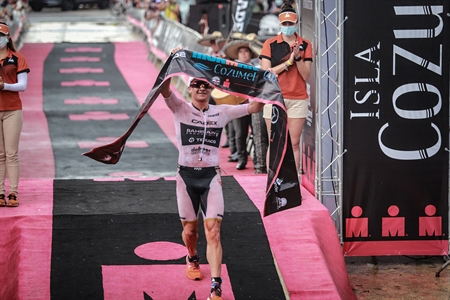 Kristian Blummenfelt ran away not only with a win on debut at Ironman Cozumel, but also a new best time over the iron distance.

The Norwegian registered a resounding victory in Mexico to become the first male in history to win an Olympic gold medal, the World Triathlon championship, and an Ironman in the same year.

His race time of 7 hours, 21 minutes, and 12 seconds was 15 minutes clear of the next competitor.

Blummenfelt came second out of the 3.8-kilometer swim in a blistering 39:41 aided by a favorable current. His transition time was relatively relaxed (1:52) compared to his short course changeovers and saw him slip into sixth position starting the 180-kilometer bike leg, but Blummenfelt steadily made his way into the lead by the halfway mark. Yet he still had more to give, putting in a surge that saw him make his way back to transition in 4:02:40 with an eight-minute lead over the field.

In the concluding marathon Blummenfelt was a man on a mission, ultimately running 2:35. By the time he broke the tape not only had he won, but also had established himself as a legitimate contender for the next Ironman World Championship, and to go under seven hours over the full distance at the Pho3nix Sub7 next year.

He said, "That was my first Ironman done and dusted! It was a great experience. I was hoping for a day like this: good conditions on the swim and surprisingly good conditions on the bike as well. The whole back side of the island had a rough headwind all week leading into the race, but it eased off and I had a smooth tailwind there as well. Really surprised with my bike leg.

"I went out there on the run trying to see how hard I could go from early on without fading. After 18K I really started feeling the fatigue and I had to use the next six or seven kilometers to fall back a little bit to make sure I didn't blow up completely. I think I was able to finish the last lap quite strongly even with my legs knackered.

"It was a very good debut and it definitely gives us a lot of confidence going toward the Sub7. Cutting another 22 minutes by having pacers, optimising the course, the tarmac, and also having another seven months of preparation this shows the Sub7 definitely is possible."