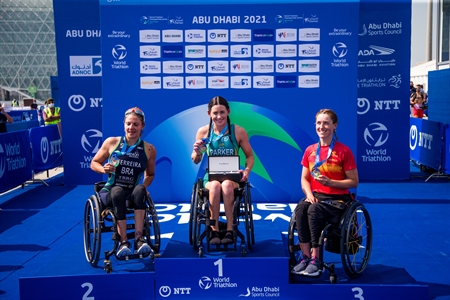 Lauren Parker defended her world title at the World Triathlon Para Championships, once again topping the field after first claiming the crown in Lausanne in 2019.

The Australian paratriathlete broke the tape ahead of Jessica Ferreira (BRA) and Eva Maria Moral Pedreiro (ESP) to put the clincher on what has been a stellar season where a silver medal at the Tokyo Paralympics was her lowest finish. This is her second world championship of the year after winning the Ironman 70.3 World Championship in September.

“I have had to overcome some physical and emotional setbacks since the Paralympics in my preparation for these world championships, so it was a really special moment to cross the finish line with this result,” Parker stated.

Abu Dhabi was also the second event for the 2021-2022 World Triathlon Championship Series. Vincent Luis (FRA), Tyler Mislawchuk (CAN), Cassandre Beaugrand (FRA), and Vicky Holland (GBR) have put their names on the board after skipping WTCS Hamburg: Luis, Beaugrand, and Holland had raced Super League Triathlon instead, while Mislawchuk was recovering from an Achilles injury.

In the men’s race, Luis led out of the water in characteristic style with Mislawchuk not far behind. The lead pack of athletes on the bike turned on the afterburners to keep the rest of the field away and decide the winner among themselves on the run. Luis and his training partner Jelle Geens (BEL) broke away to battle for gold, with the latter pulling away for a five-second lead into the tape. Mislawchuk finished in sixth just 26 seconds later.

In the women’s race, Beaugrand and Holland tucked into the lead swim pack to exit transition just 11 seconds adrift of the leaders. Caught up in a massive chase pack over the five laps of the bike course, the two athletes powered through the run to finish in 6th and 10th respectively.