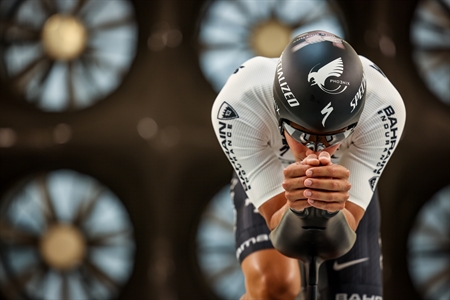 Vincent Luis is making his first foray into Ironman 70.3 racing, and he wants to do it well. He’s been planning his long-course debut for some time; with the Paris Olympics three years away, this is an opportune time to do it.

While he raced longer than Olympic distance at the Professional Triathletes Organisation Championship in Daytona last year, Vincent admits that had been a last-minute decision. “This one I want to prepare for it more,” he says. “I had my first experience last year in Daytona and I quite enjoyed the training and the process and also riding the time trial bike. It's a lot of things to think about and I quite enjoy seeing the people racing half distance.”

The Frenchman made his way to Specialized Headquarters in Morgan Hill, California to do wind tunnel testing and dial in his time trial bike fit. “I want to optimize everything. In the wind tunnel we noticed a few things: my front end is really narrow, so for comfort we’re getting my elbows just a little wider, maybe one or two centimeters. We lowered my saddle a bit, too, to avoid any glute tissues. We tested different helmets, we tested different little tricks that work or don't work. But the thing that we learned the most is I have to spend time on my TT bike, and that's exactly what I'm going to do.

“I also need to dial in my nutrition and my hydration for the next few weeks. It’s going to be all about making sure I can handle the distance but also that my body can sustain the energy and the power if I want to race at 100%.”

While he keeps his expectations low by just making sure he has a good swim, staying on top of his nutrition to avoid stomach issues, and setting a decent time, he’s still got that competitive fire that’s taken him to two world titles and Olympic bronze. Vince says, “I did not really have in mind to qualify for the Ironman 70.3 World Championship -- and then I watched St. George. Gustav [Iden] did really well. Kristian [Blummenfelt] unfortunately had a flat, but I think he was going to also be on the podium. So yes, it gave me some inspiration… I'm going to race for the win or at least a podium and I hope there'll be a qualifying slot. If I can secure it earlier, I'll go for it.”

Should he qualify for next year’s 70.3 world championship, Vince will still build much of next season around World Triathlon and Super League Triathlon racing. He reveals, “We might start maybe in Bermuda in April or Yokohama in May with a World Triathlon Championship Series. Then I want to see how the calendar develops. Next year there will be the Commonwealth Games. I'm not racing, but people will be busy doing that so maybe the world series will be a bit more open. And then we'll jump on the Super League series… After that I think it's going to be similar to this year. I really want to make sure I prepare and I'm ready for 70.3 Worlds.”

If he had to face off against any of his Bahrain Endurance 13 teammates, he thinks Jan Frodeno is the benchmark over the half and full distance. “And also Kristian; I guess these two are a big reference. I want to race the best.”