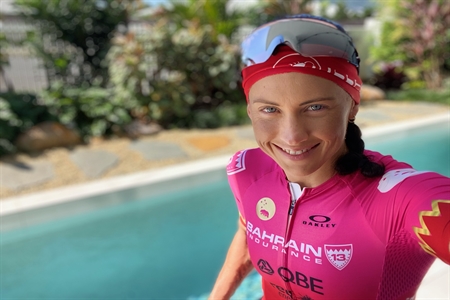 The Bahrain Endurance 13 saw action over long and short course this weekend at races in Cozumel and Malibu.

Lauren Parker backed up from her Ironman 70.3 world championship win in St. George with another excellent performance at Ironman 70.3 Cozumel in Mexico. Traveling with medical professionals who dressed her feet after the swim and post-race, Parker conquered the second of three consecutive races. She is set to return to the US for Ironman 70.3 Muncie this coming weekend.

Kristian Blummenfelt joined Vincent Luis, Cassandre Beaugrand, and Vicky Holland on the starting line of the Super League Championship Series Grand Final in Malibu. Racing the Eliminator format of three supersprint triathlons with four-minute breaks between them, Blummenfelt drove chase groups to bridge gaps and cross the finish line first in two of the triathlons. He finished in fifth on the last stage. Luis just behind in sixth consolidated a fifth place on the overall championship standings.

Beaugrand and Holland finished in fifth and 11th respectively to conclude their four-week Super League campaign as eighth and fifth overall. Holland was also part of the champion SLT Eagles team, while Luis and Beaugrand with the SLT Scorpions celebrated vice-champion status.