A tough weekend of racing 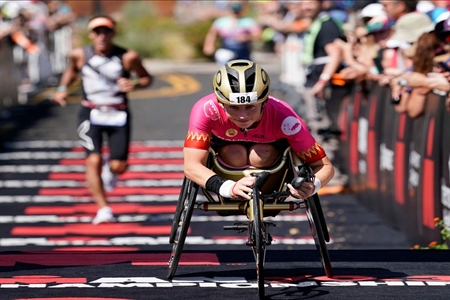 The Ironman 70.3 World Championship in St. George, Utah drew a stellar field to race on an arid and mountainous course. Fresh from her silver at the Tokyo Paralympics, Lauren Parker claimed the world title in the para category. To even get on the starting line for her maiden appearance at this event, Parker overcame several challenges in the lead-up including sustaining third-degree burns on her feet during race week.

Parker navigated a course made slippery by rain, ground up the hills, and braked hard on treacherous downhills to finish in 7 hours, 54 minutes and 53 seconds. Her feet were rebandaged by nurses after the swim and immediately post-race to prevent infection.

“That was without doubt the hardest race I’ve ever done in my life – even tougher than Kona!” she said post-race, referring to the Ironman World Championship she had completed as an abled athlete.

The fierce competition took its toll on teammates Holly Lawrence and Daniela Ryf, who toughed out the pro women’s race to finish 8th and 11th respectively. Kristian Blummenfelt suffered a mechanical during the bike leg; it took him out of contention for the win, but with true grit he continued on to finish 26th.

Vicky Holland, Cassandre Beaugrand, and Vincent Luis marked their third race in as many weeks as they toed the line at Super League Triathlon in Jersey. The Enduro format involved three non-stop rounds of swim-bike-run, making for a fast and drama-filled race. Beaugrand battled through to take third place with Holland on her heels in fourth, while in the men’s race Luis finished the day in eighth. As they head into the final race of the series next weekend in Malibu, Luis is fourth on the men’s leaderboard, Holland stands third woman overall, while Beaugrand cracks the top 10 with a 9th place.