Kristian Blummenfelt wants to make history: with the Olympic and World Triathlon championship titles under his belt, he is now taking aim at the 70.3 world title. Daniela Ryf is going for a record sixth 70.3 world title and is on a quest to claim the Nasser Bin Hamad Triple Crown yet again having won Ironman 70.3 Dubai earlier this year. Holly Lawrence was the vice champion in 2019 and is looking for her second 70.3 world title. And after an amazing silver medal finish at the Tokyo Paralympics, Lauren Parker is targeting gold in Utah.

We asked team CEO Chris “Macca” McCormack and team member Vincent Luis how they think the weekend’s racing will go.

Macca: It's always been something we've dominated. There was the great race with Jan Frodeno, Javier Gomez, and Alistair Brownlee back in South Africa [2018]. Do you follow both the men's and women's long-course racing?

Vince: Yes I follow both. I followed the Collins Cup also. Great racing, different type of racing but still great. In the end I would say it's most likely Daniela that wins the race.

Macca: There's a lot of talk around Daniela being a little wobbly this year. You know, her Collins Cup race --

Macca: But everyone's talking about Collins Cup with the bad performance. She said she was a bit ill, so suddenly there's this hint that potentially she may be vulnerable.

Vince: I mean when you’ve won as many times as she has won it, you know how to win big races.

Macca: And what's your thoughts on -- Well, you've raced Kristian. He's the olympic champion now and he's done a few of these 70.3’s. Can he win on this course? Have you seen the Utah course?

Vince: I think Kristian for sure is going to be a top contender. I think he swims a bit better than Gustav [Iden, 2019 Ironman 70.3 world champion] so he's going to be more at the front with the guys like Ben Kanute. If Gustav makes a comeback it can be interesting, but Gustav will have to work on the bike to make it back up.

Vince: Yeah, I’m racing Bahrain this year on December 5th. I heard Kristian’s racing, and nother OIympic champion? We'll see if Alistair is keen to race but that would be good to have him around. Hawaii is cancelled, so maybe he's looking for something to race at the end of the year.

Macca: There's talk that we won't even get Hawaii, that it’s not even going ahead in February so that'll open things up. Far out. So who’s your top three in the men?

Vince: The Norwegians, they're like me: they're 30 years old, full of adrenaline and everything so if you have to sprint like if you have to make it up on the bike they would do it. There are other guys, Sam Long and all these guys, but well they can lose four minutes on the swim and they're not gonna make it back.

Macca: On the women's side we've talked Daniela, there's Holly and there's going to be like you [World Triathlon] guys, girls going across [to long distance].

Vince: I think I'll put Holly still for the win because she knows how to race. She's not on home soil but she lives in the US so she knows what to do; she’s raced St. George already. I'll put Paula Finley second. She raced well in the Collins Cup. She was in the heat with Lucy [Charles-Barclay] and Katie [Zaferes]. She's going to lose time on the swim but she did well there.

Macca: Watching Kristian emerge in Super League and watching him race you, he has that vulnerability in the swim but he just doesn't seem to care. Nothing flusters him and maybe that's youthful exuberance, but i'm interested to see the Norwegians because they sort of come as a team; they race together, they work together.

I may switch Gustav and Kristian around. I think the Utah course suits Gustav.

On the women's side I'm going with Daniela every day of the week. But I think Daniela has a lot to prove, and I'll take Holly and Paula also, so we're pretty close. I think Holly's really good on this course and she steps up at 70.3 Worlds. And then next year, it’s you, mate. 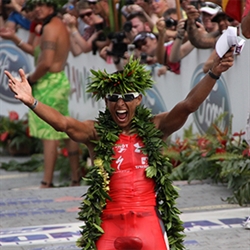