Luis back on top at Super League Triathlon 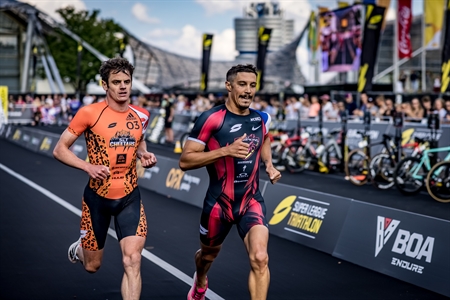 Vincent Luis is back on top at Super League Triathlon, winning the second event of the championship series in Munich over a challenging technical course in humid conditions.

Raced over the Equalizer format, the competition kicked off with a bike time trial stage over 2.4 kilometers to determine start order and gaps in the next stage: a nonstop swim-bike-run-swim-bike-run in the historic Olympiapark, host to the 1972 Olympic Games and the upcoming 2022 European Games.

Despite lagging behind during the time trial, Luis erased the deficit over the 300-meter first swim to come first out of the water and get over the bike mount line, snatching the Short Chute prime which would serve him later on. After a heart-pounding 3.6-kilometer bike and 1.8-kilometer run battling fierce competition from Alex Yee, Hayden Wilde, and Jonathan Brownlee, Luis was back in the water where he once again asserted his dominance. He then worked with Brownlee on the bike leg to leave Wilde and Yee behind and give themselves a 15-second lead going into the final run.

With Brownlee looking strong as ever, Luis used the Short Chute in the final few hundred meters to take a shortcut toward the finish line and break the tape first. It brought back echoes of their battle in Mallorca three years ago when Brownlee had the Short Chute -- but Luis had still out-sprinted him.

“Honestly I thought my race was done after this first swim, but I had a Short Chute so I just had to manage to get to the finish line close to the lead, and I knew it would be the little buffer that I needed,” Luis said post-race. “To be honest I had thought about not taking it and doing a fair sprint with Jonny, but he was pretty strong on the run. He tried a few times and I had to hang on... I dug really deep for the Short Chute to grab it so I didn't want to waste the effort that I did in the swim.”

With this win and his second-place finish in London last week, Luis takes the lead on the championship leaderboard heading into Jersey for the penultimate race of the series.

Vicky Holland backed up from her podium finish in London to take 8th here, while Cassandre Beaugrand finished 14th.