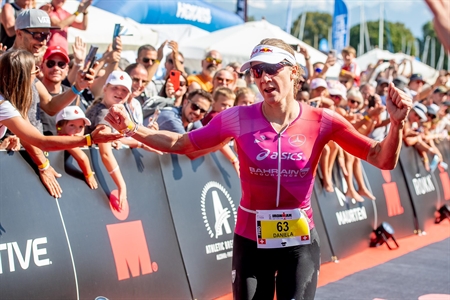 Daniela Ryf took a wire-to-wire victory at Ironman Switzerland on Sunday. Backing up from her efforts racing 100 kilometers at the Collins Cup last weekend, the Swiss champion led throughout the three-kilometer swim, 180-kilometer bike, and 42-kilometer run held around Lake Thun at the foot of the Swiss Alps.

With the Ironman 70.3 world championships in St. George, Utah happening in two weeks, a full ironman seems like a non-standard lead-up. Ryf explained her reasons post-race, saying, “I had some health problems the last weeks so it’s the first time I’ve had some energy again, and to have it out here was really special. I did this race just for pleasure and because I felt like I wanted to do it and I’m so happy I did.

“Today I don’t yet feel quite like I did in April… now I saw that I’m able to go hard again and that really helps to have trust in your body. In two weeks in St. George the course is really hard as well, and so I think today is a really good preparation for it.”

Racing his third Ironman in the course of a month, David Plese took fifth place with yet another sub-8 hour finish.

The Bahrain Endurance 13 also saw action in shorter-distance pursuits over the weekend. Vincent Luis continued to build on his fitness post-Olympics with a second-place individual finish at the first Super League Triathlon championship event in London, while Vicky Holland rounded out an all-British female podium and Cassandre Beaugrand took a top 10 finish.

With a new teams element to the racing, Holland helped the SLT Eagles climb to the top rank while Luis and Beaugrand contributed to the SLT Scorpions’ second place finish.

In further teams-based racing Javier Gomez raced over the sprint distance at the French Grand Prix in Quiberon, taking the individual win and propelling FGP team Triathlon Lievin to the top of the overall ranking.