Silver in Tokyo for our golden girl 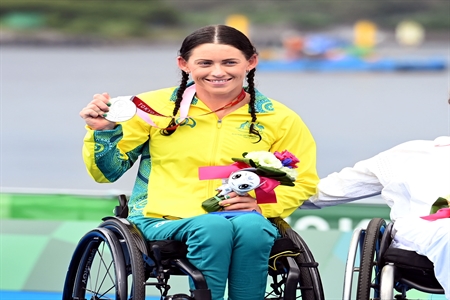 Lauren Parker on Sunday claimed a silver medal for Australia at the Tokyo Paralympic Games.

The reigning world champion in the paratriathlon wheelchair category (PTWC) led from the gun through the 700-meter swim, 20-kilometer bike, and most of the 5-kilometer run even as the hard-charging Kendall Gretsch from the USA pushed to close the gap between them. In a nail-biter down the finishing straight, Gretsch drew up on her racing chair and pulled ahead to break the tape. Only 0.01 seconds separated the two, making this the closest finish ever in a paratriathlon.

Parker said post-race, “I knew she was coming fast and I just had my head down and was going for it. But I got stuck at one of the U-turns behind someone on that last lap which was unfortunate. That was a few seconds that I lost, but I put in everything I could.

“I’m happy with the effort that I put in and I’m proud of my effort.”

This silver medal is a highlight of what has been an astounding journey over the past four years. After sustaining a spinal cord injury from a major training accident in 2017, Parker made one of the fastest transitions to adapted sport ever recorded. She debuted on the paratriathlon circuit in nine months, and then won the Commonwealth Games bronze a year after her accident. She also won bronze at the world final on the Gold Coast six weeks after undergoing spinal surgery; in 2019, she turned that bronze into gold and a world championship.

Parker added, “This time four years ago I was lying in a hospital bed thinking my life was over. I had amazing support around me and if it wasn’t for that support, again I wouldn’t have overcome that life-changing injury. I’ve overcome many surgeries and many obstacles, but I never would have dreamed of representing my country four years later.”

She already has her sights on the road ahead, planning to race Ironman 70.3 events in the USA in the next few months, then another paratriathlon world title next year. She is also taking aim at the Paris, Los Angeles, and even Brisbane Games.

Parker’s medal-winning effort bookends a weekend of racing for the Bahrain Endurance 13, which began on Saturday with Jan Frodeno, Daniela Ryf, and Holly Lawrence racing for Team Europe in the Collins Cup in Samorin, Slovakia. Frodeno won his match, while Ryf took second and Lawrence third in their respective matches despite challenges: Ryf a stomach bug and Lawrence a bike crash. The three contributed a total of 9.5 points to Team Europe’s total of 42.5 points to help win the title and hoist the Collins Cup.