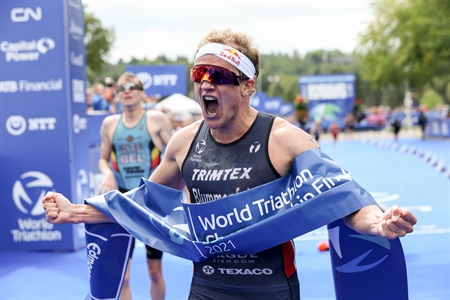 Kristian Blummenfelt yesterday won the World Triathlon Championship Series Grand Final in Edmonton Canada to clinch the #1 ranking and world champion title. With this the Norwegian storms into the history books to become the first male athlete to win both Olympic and world titles in the same year.

Going into the Grand Final ranked #2, Blummenfelt put together a strategic race over the 1.5-kilometer swim, 40-kilometer bike, and 10-kilometer run to outsprint Marten Van Riel (BEL) and Leo Bergere (FRA) to the tape and put an exclamation point on a remarkable WTCS season.

While Bahrain Endurance 13 teammate Vincent Luis (FRA) led out of the swim and onto a bike breakaway with Van Riel, Blummenfelt drove the chase group hard to stay within 24 seconds of the leaders by the time they dismounted. Once on the run, he moved into the front group and paced the first eight kilometers before attacking to drop all but two men in the final two kilometers. Blummenfelt kept his foot to the pedal to beat Van Riel by mere nanoseconds and become the undisputed champion -- not just of the Grand Final, but of the world.

“Before this season I was thinking I’m getting old but I have no titles; it’s about time I get a title. And now I have the Olympic title and world champion title and had a really good season, so I’m especially happy with this race,” said Blummenfelt. “It’s been tough traveling down to Canada and doing three days in quarantine in the hotel. My body was smashed after that so I’m just happy I managed to find my form in time for this race.”

Blummenfelt will also take home $30,000 of the Grand Final prize pot and a bonus of $80,000 for topping the WTCS rankings.

Luis, who has had to manage recovery from a run injury to race the Olympics, finished 10th on the day to end the season ranked 6th. He takes $3,500 in race prize money and a bonus of $15,000.

In further racing for the Bahrain Endurance 13, Cassandre Beaugrand stayed close to home to win the French Grand Prix event in Chateauroux. The French athlete made a victorious return to racing since her Olympic bronze in the mixed relay. Along with her win earlier this year in Dunkirque and second in Metz a month later, she has cemented her triathlon club Poissy at the top of the series.

David Plese placed sixth at Ironman Copenhagen, backing up after racing the Ironman European Championship in Frankfurt last week in a bid to secure qualification for the Ironman World Championship. The Slovenian recorded his best her time for the distance going under the 8 hour mark(7:58:05) and joined the Sub8 Club.