Silver lining for Luis in Montreal 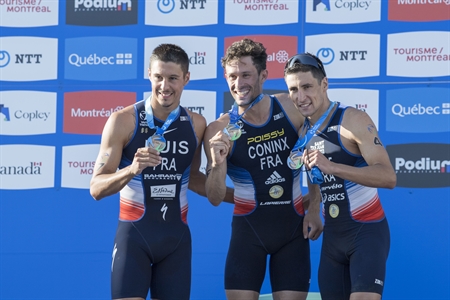 Vincent Luis drew on his prowess in supersprint races to take silver at World Triathlon Series Montreal, where the Eliminator format was introduced over the weekend.

Held over the course of two days, two qualification heats on Friday saw 30 athletes go through to the Saturday final: three stages where the 10 slowest are eliminated at the end of each until only 10 duke it out for the podium and WTCS ranking points.

The Tokyo Olympic mixed relay bronze medalist placed fourth in his qualification heat to cement a spot in the final the next day. Stage One saw him lead out of the 300-meter swim and stay inside the front group over the 7.2-kilometer bike before some chain trouble saw him drop off the back. A controlled 2-kilometer run put him back inside the Top 10 and through to Stage Two. It was more of the same for the second stage, with a good swim, bike, and run to finish in the Top 5 and head into the final stage.

These tactical finishes allowed Luis to save energy for Stage Three, which would be a free-for-all for the Top 10 athletes including his French compatriots Leo Bergere and Dorian Coninx. After Luis led out of the swim once again, the field of 10 stayed together over the bike to turn the race into a run shootout. The resulting French podium sweep is a product of the nation’s long experience over the supersprint distances, and why Luis has also dominated Super League Triathlon racing.

“Us French, we race French Grand Prix: it’s short-form racing, we basically raced in a parking lot since we were ten years old. We really enjoyed that and I think we proved we have a really strong team,” Luis said post-race. “I am still nursing a little injury on my lower leg, and I think I missed these hard and fast sessions too… I’ll take silver after the Tokyo disappointment [in the individual race]. I am really happy to be back here eating at the adults’ table now.”

The second-place finish sees Luis climb five positions to rank sixth in the world before heading into the Grand Final in Edmonton next week alongside world #2 and Bahrain Endurance teammate Kristian Blummenfelt.

In further results, David Plese placed 11th at the Ironman European Championship in Frankfurt. Capping off the racing for the weekend, Holly Lawrence took silver at the Escape from Alcatraz Triathlon, sharpening up for the Collins Cup in two weeks’ time. She will race for Team Europe with Bahrain Endurance teammates Jan Frodeno and Daniela Ryf.