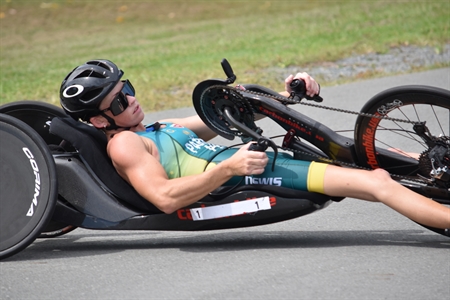 In just a little over a month’s time, world champion and world no. 1 Lauren Parker will line up on the starting line of her first Paralympic Games. Triathlon Australia announced on Monday the six athletes fielded in its bid for more gold medals to add to those the nation won in Rio. Tokyo will be only the second Paralympics to feature paratriathlon.

“I’m so proud to represent my country on the biggest stage and excited to race. It’s been a long road, with plenty of challenges along the way, but nothing is going to stop me from winning gold in Tokyo. Not just for me, but everyone on my team, and to inspire kids to dream.”

Parker’s journey to Tokyo has been a long and arduous one. She has navigated the transition from elite athlete to elite para athlete with belief, determination, and grace through adversity.

Weeks before racing her first ironman as a professional triathlete in 2017, Parker broke her spine in a freak cycling accident where both her tires blew and she crashed into a guardrail at 45 kilometers an hour. Less than a year later, she brought home a bronze medal for Australia at the Commonwealth Games, and six weeks later another one at the ITU Grand Final after recovering from spinal surgery.

“It was so surreal to be on that start line at the Commonwealth Games 11 months after my accident,” she says. “Paratriathlon is quite different to able-bodied triathlon. I had to get used to using a hand cycle for the bike and really get used to using my arms for everything.”

She admits it wasn’t all smooth sailing after she woke up in the hospital. “I thought my life had finished; I thought I had nothing to live for. But I had amazing support around me with family and friends and with that support I was able to slowly look at the positives rather than the negatives. I found out that it was possible for me to get back into my sport that I once loved, in triathlon. I think that really saved me and it gave me something to work towards.”

One of the goals Parker set for herself was the paratriathlon world title, which she clinched in 2019. She reminisces, “That day was such an incredible day crossing the finish line in first place. It brought back memories of what I’ve been through in the years prior, overcoming my accident and the obstacles I had to go through and the hard work I’ve put in. It made everything worthwhile.”

This win along with her performance at the test event made her the red-hot favorite for gold at the Paralympics. Then the global COVID-19 pandemic shut down the world, and Tokyo was postponed.

But she treated the postponement as opportunity to work on her cornering skills in the racing chair. Additionally, her bid to qualify for hand cycling in the Paralympics has also brought her greater strength on the bike leg, which she used to great effect over the past few months in the Devonport, Newcastle, and Mooloolaba triathlons.

“If I’ve had this accident then there must be a reason. I feel like by sharing my story, how I’ve overcome my accident and being told I’ll never walk again, I hope that would give hope to others in their struggles in life,” she confides.

“I’d love for little kids either with disabilities or without to look at me and know that there’s hope out there, that they can achieve something, they can set a goal and reach it.”