A tough day out in Leeds 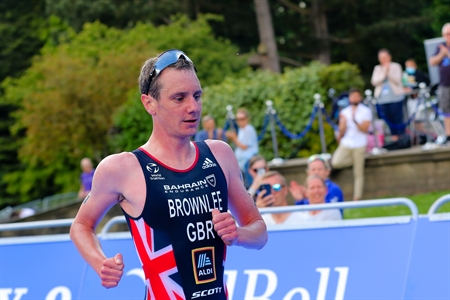 The Bahrain Endurance 13 continued their build-up at World Triathlon Championship Series Leeds, the final WTCS race before the Olympic Games. The highest place finishers were Kristian Blummenfelt in 6th, and Cassandre Beaugrand in 8th.

Blummenfelt said post-race, “Not the results I was looking for in my last two races, but overall a solid month behind me.” With two wins and two top 10 finishes, he now goes into his final altitude camp before heading to Tokyo.

While Javier Gomez was on the hunt coming out of the swim and onto the bike, the Spaniard’s comeback WTCS race ended early. He recounted, “Unfortunately, for some reason another athlete hit a cone in front of me and crashed. I couldn’t dodge him and fell off my bike too. It looks like I only got some road rash and I hope to be back training and racing soon.”

Nevertheless a scare for the Olympic silver medallist, as a bike crash put an end to his Rio campaign.

Meanwhile Alistair Brownlee has conceded his Olympic campaign, admitting to struggling with an ankle injury for months while still trying his best to get fit for racing. Handed a DQ post-race for an infringement in the swim, he still played a major part driving the lead packs on the bike before jogging to a finish. He said, “I think Great Britain have a great team going to the Olympics and I wish them all the best. Alex Yee’s [winning] performance today was outstanding and a breakthrough.

“I’ve known my ankle needs surgery for a little while. My focus will be on getting healthy again and then long-distance triathlon in the future.”

Vincent Luis and Vicky Holland sat out the race, opting to be cautious and manage minor niggles. Tyler Mislawchuk is slated for his next tilt at the Huatulco World Cup this weekend.

With the most important race of the last five years coming up, those bound for the Olympics need to be at their peak not now, but in seven weeks’ time.