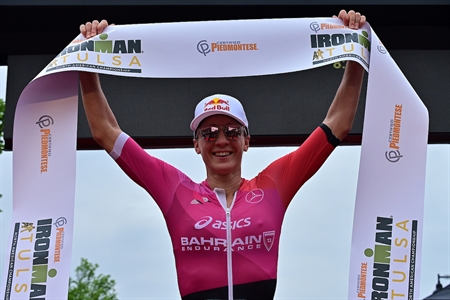 Kristian Blummenfelt and Daniela Ryf extend their winning streak after top performances in Lisbon and Tulsa this weekend.

Blummenfelt did double duty on the race weekend at World Cup Lisbon: the mixed relay Olympic qualification event on Friday where he did the lion’s share of work to get Norway to striking distance of the Top 3, then the men’s individual event on Saturday where he pulled off a win nearly identical to what he showed in Yokohama last week.

Coming out of the 1.5-kilometer swim 30 seconds back from the swim leader, it wasn’t long before Blummenfelt’s strong bike legs put him in the lead group, driving and controlling the pace. Despite a hill and a dead turn on the multi-lap bike course, the lead and chase groups converged into one big pack by the end of 40 kilometers, with about 50 competitors getting off the bike all at once. The run would decide the winner, and Blummenfelt put himself in prime position to get it done. He paced the first half of 10 kilometers, then pounced to take the lead. With one final surge in the last lap, he crossed the Olympic distance finish line in 1:42:33, clear of the rest of the field by eight seconds.

“I knew that Gustav was in the second pack and I didn’t mind that he was catching up. I didn’t want to do all the work on the bike myself especially when I know that I’m in decent run shape so I can do it on the run as well. I just tried to keep it controlled on the bike and stay out of trouble,” said Blummenfelt post-race. “On to the next one in Italy next weekend and Leeds and hopefully I can keep the streak.”

Bahrain Endurance 13 teammate Tyler Mislawchuk suffered a flat tire putting him out of contention, but salvaged his race to finish 51st. Vicky Holland finished 5th in the women’s individual event after emerging second from the water and riding in the lead pack. It marked a welcome return to racing for the Brit as she will now target her how race of Leeds on June 6.

On the other side of the world, Ryf capped off her US tour with a hard-fought win at the Ironman North American Championship in Tulsa, Oklahoma, clocking in at 8:40:34.

Three weeks after topping the Ironman 70.3 North American Championship at St. George, Utah, the four-time Ironman world champion from Switzerland seemed on track for another flawless win. After a 52:21 swim over 3.8 kilometers, Ryf took the lead on the bike to finish 180 kilometers in 4:39:00, the day’s fastest split. While the 15-minute margin at the start of the marathon was more than enough for Ryf to win by 5 minutes at the finish tape, she admittedly struggled in her first full distance race since the 2019 Ironman World Championship.

“I was glad when the finish line came. It was a good day today but I had to dig really deep and in the end on the run I felt a lot of pain everywhere... I pushed hard on the bike and I guess I paid for it a bit on the run,” she revealed post-race. “It was definitely a bit of a challenge to combine the two [North American championships], but pretty much actually straight off St. George I went back into training. I had a really good two weeks in Sedona so I’m glad I could stay in the US a bit and explore and we could really train a lot. I hoped it was not too much but I think it worked out quite okay. I just enjoyed training in Sedona, such beautiful riding so I’m glad I could show a good performance today.”