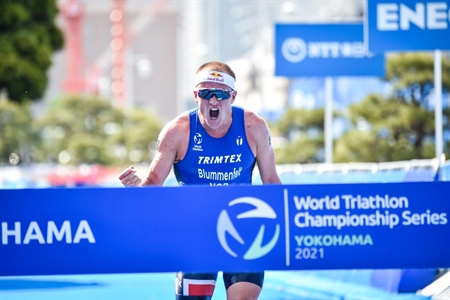 Kristian Blummenfelt (NOR) claimed victory at the World Triathlon Championship Series race in Yokohama, winning in 1:42:55 over the Olympic distance. This marks his second World Triathlon series win; his first was the Grand Final in Lausanne in 2019.

Bahrain Endurance 13 teammate Vincent Luis (FRA) led out of the 1.5-kilometer swim and onto the 40-kilometer bike leg in 18:00. However, Blummenfelt was only 18 seconds back coming out of the water alongside another teammate Henri Schoeman (RSA), and both made their way into the front group.

As the pack grew thanks to the flat multi-loop course, it became clear the race would be decided not on two wheels, but on two feet.

More than 30 athletes hopped off their bikes with only one minute separating them. Blummenfelt was quick through transition to overcome his 30-second deficit to Jelle Geens (BEL) off the bike, exiting onto the run course in a group of four athletes including Geens. They set a high pace to drop the main pack, and soon the battle was between Blummenfelt and Geens for gold. The two stayed close until the final lap when Blummenfelt took the lead and surged three times to break Geens and avoid a finish line sprint. With one kilometer to go, Blummenfelt had put enough daylight between them to be able to celebrate down the chute. He logged the day’s fastest 10km split in 29:26.

“It’s so good to be back racing again,” said Blummenfelt post-race, having redeemed himself in the race that had seen him log consecutive DNFs in 2018 and 2019. “Great to finally be back and have a good result here in Yokohama. I did better in the past, but the last two times have been awful, so it’s good to come back and do another good race and also start an Olympic year with a good performance.”

He revealed that he had been pacing himself throughout. “I thought it was comfortable and felt that the bike was quite easy, but didn’t know if the other guys were struggling or not. I think this was my easiest run; I felt like I had control all the time on the run there.”

Blummenfelt noted that while the bike and run courses were similar to the Tokyo Olympics course, the conditions in Yokohama were milder. He commented, “I think it’s going to be way hotter, tougher conditions in Tokyo. Today was just a very soft test.”

Schoeman and Luis finished in 5th and 6th respectively. A few hours earlier, Cassandre Beaugrand (FRA) overcame cramping throughout her race to finish 10th, the first French female athlete across the line. With all three athletes almost assured of Olympic selection it was a good way to start the 10-week build to the main goal.

As they continue their campaigns for Olympic selection, they make their way back to Europe next weekend to join Vicky Holland (GBR), Alistair Brownlee (GBR), and Tyler Mislawchuk (USA) on the World Cup Lisbon starting line.