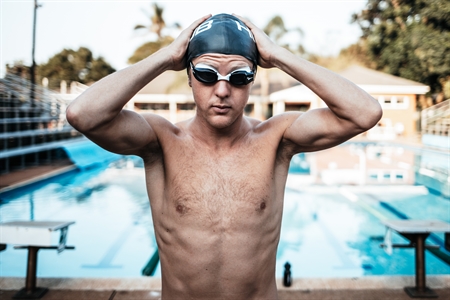 Henri Schoeman winning bronze at the Rio Olympics triathlon came as a shock to the world watching. It was his first ever podium finish on the world stage, and especially unheralded because he had nearly not made the start due to a viral infection a few days prior.

But that was no flash in the pan. Henri backed up that performance by winning the Grand Final in Cozumel the same year. In 2018 he took the gold medal at the Commonwealth Games, and over the past two years he has continually challenged Vincent Luis for the Super League Triathlon series crown. No longer flying under the radar, as the 100-day countdown to the Tokyo Olympic Games begins South Africa has recognised him as one of its top medal hopes.

Henri is eighth on the Olympic qualification ranking off strong Top 10 performances on the World Triathlon Series as well as the Tokyo test event in 2019, where he came ninth. This year after stretching his legs in some track races and triathlons in South Africa, he will line up in Yokohama on May 15 with the world’s top athletes to kick off international racing leading into the Olympics.

Bahrain Endurance 13 team CEO Chris McCormack believes being part of the team will amplify Henri’s racing ability. “He’s a bit of a loner, he trains with his father… but now there’s a lot more foundation to help support his ambitions. There’s also a pressure to perform as part of the team, but I think he rises to that sort of challenge,” he says.

He also backs Henri’s ability to perform in the heat and in important races. “Henri’s fantastic over the three disciplines of triathlon. He’s always going to be in the action. But also he got bronze in Rio in a very hot race. When you turn the temperature up to 38 degrees, pure speed gets sapped out and your ability to handle and disperse heat becomes the deciding factor. Having an Olympic bronze medal, he’s shown he can perform on the biggest stage. So now he’s got experience, he’s got the capabilities, and he’s got the arsenal to win. Can he win gold? I wouldn’t be surprised if he did. He’s part of our team because of it.”