Cassandre Beaugrand is locked in on Tokyo 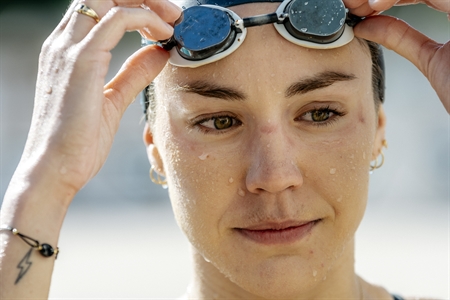 With the resumption of Olympic triathlon qualification in two weeks’ time, many athletes will toe the start line in Yokohama to state their case for selection and pave their path to Tokyo. Hoping to make her second Olympic appearance is Bahrain Endurance 13 freshman Cassandre Beaugrand.

The delay of the Tokyo Olympics somehow has worked in her favor; after sustaining a foot injury early in 2020, Cassandre was able to recuperate and played a key role in France retaining their mixed relay world title in Hamburg in September. She then kicked off 2021 with a win at the ETU European Cup Melilla. She says, “It was quite stressful to be back racing but I really enjoyed it and I needed that to begin my season. I think I did some good things and I hope it will be the same in further competition.”

Cassandre made her Olympic debut in Rio at the tender age of 19, selected by her federation off strong performances on the national and European circuit as a junior and elite athlete. Finishing 30th at her first Olympics, she knew there was only one way to go: up.

“I didn’t have any expectation because I was young, so I just enjoyed the moment,” she says. “Since Rio, I worked a lot and I tried to think about every good moment I can have in competition.”

She started reaping the fruit of that labour, becoming French national champion in 2017. In 2018 she won her first World Triathlon Series race in Hamburg and the following day raced on the French relay team that claimed the nation’s second world title. They have since defended that world title twice as well as won the Tokyo test event, with Cassandre as the mainstay on the roster.

She also became a chief challenger on the Super League Triathlon championship circuit between 2018 and 2019, ranking as high as #3 overall and recognised as the fastest runner in the series.

Cassandre is the top French athlete in the Olympic individual qualification ranking, and if spots were allocated today France would max out the three-athlete quota. Still, which athletes are selected is up to the federation’s discretion, especially with the first Olympic gold medal in the mixed relay on the line.

Bahrain Endurance 13 team CEO Chris McCormack says, “The French have a very successful development system and their depth is remarkable because of that. She’s been part of the dynamic French team that are the ones to beat in the mixed relay. I think her evolution as an athlete is coming. She’s a massive Super League talent; her speed racing is incredible and with World Triathlon also moving into super sprint racing I see her as being a big part of Bahrain Endurance 13 success in women’s racing over the next few years.” He further states, “I think she’s the most exciting young talent in triathlon we’ve seen since Emma Snowsill.”