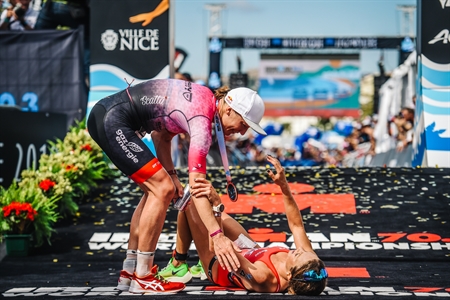 Lawrence, who won St. George in 2017 and 2019, knows how to win on this course with its reservoir swim and hilly bike and run courses. This will also be the site of the Ironman 70.3 World Championship later this year, where both Lawrence and Ryf will be top contenders for the world title. In the 2019 Ironman 70.3 World Championship (the last time it was held and the last time the two raced each other), Ryf and Lawrence finished first and second, respectively.

Amid the disrupted racing season of last year, Lawrence won Ironman 70.3 Cozumel and placed fourth at the Professional Triathletes Organisation Championship at Challenge Daytona. She says, “Excited to kick off the 2021 race season at St George. Usually I like to race a smaller race before North American Champs to see where I’m at and blow off the rust, so it still feels like an early season race to me right now. But after a year long of very little racing I’m just stoked to feel like we’re back in action and excited for the year ahead. With Daniela on the start line I know it’s going to be a tough race and I always enjoy the challenge of racing her!”

In 2020 Ryf chose not to race and instead finished her bachelor’s degree in food technology, returning to racing this year to win Ironman 70.3 Dubai. Ironman 70.3 St. George is the first of two North American championship races on her calendar, the second being the full distance Ironman North American Championship in Tulsa, Oklahoma on the 23rd of May where she will validate her entry to the Ironman World Championship.

Ryf says, “It’s likely that many races will have to be postponed into the fall again. With fewer opportunities to compete, everyone will be looking to enter [the same races]. But that makes racing even more fun, as I enjoy the challenge and facing the best.”