Vicky Holland on track for Tokyo 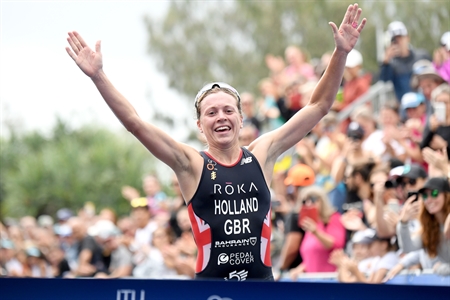 When Rio Olympic Games bronze medalist Vicky Holland won the Mooloolaba World Cup race last year, it was a sign that her winter preparation had gone well and she was on form building into the Tokyo Olympic Games. Then the world’s sporting calendar went on pause, and she found herself and her peers having to wait another year for a chance at Olympic gold.

Unlike most of her peers though, she didn’t need to deal with uncertainty in being selected. Vicky had already paved her path to Tokyo thanks to her podium performance at the Tokyo test event in 2019.

This will be her third Olympic outing, and her first as Great Britain’s first female Olympic medalist in triathlon. In the interim between Rio and Tokyo, she also became the ITU triathlon world champion as well as Commonwealth Games bronze medalist and mixed relay gold medalist, showing she has the consistency as well as capability to deliver on big race days.

Vicky has been putting in the work at home in Bath, England. She says, “It must be the first time in five or six years I’ve spent the entire winter in the UK. I’ve put in a big amount of work, probably my most consistent and biggest winter ever. I’m now ready to step into doing more race-specific work.”

The upcoming World Triathlon Champion Series race in Yokohama will be her first outing since Mooloolaba. Lining up against a stellar field including reigning and past world champions and fellow Olympic medalists will give her a better understanding on where her fitness is in comparison.

As Vicky winds up to unleash that pent-up momentum in Yokohama, Bahrain Endurance 13 team CEO Chris McCormack notes the value her experience brings. “We’ve gone more than a year without racing. That’s the great unknown in this entire situation and if you’re a betting person, you tend to bet on experience because experience tends to trump inexperience when difficulties are presented.

“Vicky’s the veteran female athlete of the British team. Even though this is going to be a unique Olympics without the crowd pressure and expectations, it’s still a monumental event. I think she has the experience in past Olympics and big race performances to not be overwhelmed, and to get it done.”