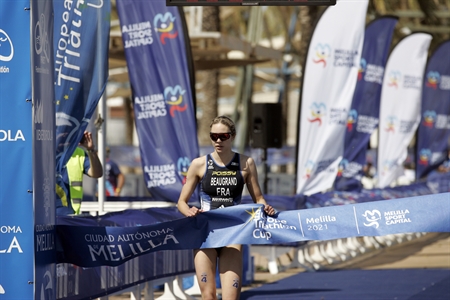 In her first race as a member of the Bahrain Endurance 13 team, Cassandre Beaugrand took the top spot at the European Triathlon Continental Cup race in Melilla. Traveling to the sunny Spanish enclave in northern Africa, the mixed relay world champion made sure her long winter of training did not go unrewarded in the first race of her season.

The pace was high from the starting gun of the sprint distance race. Beaugrand emerged from the 750-meter swim leg in 12:31 with a big bunch of athletes including a sizeable French contingent. Over four laps of a flat bike course totalling 20 kilometers along the coast, this lead pack of 12 gapped the rest of the field to ensure the winner would be decided among themselves on the run.

Beaugrand got off the bike in 27:50, slightly off the back of the group but with plenty of energy to spare. This she unleashed as she surged to the front in the opening meters of the run leg and never looked back. Completing 5 kilometers in 15:08 for a total race time of 57:07, Beaugrand stopped the clock 18 seconds ahead of a fast-chasing Angelica Olmo (ITA) who relegated Beaugrand’s compatriots Leonie Periault and Lea Coninx to third and fourth respectively.

While the French are assured of a berth in the Olympic mixed relay triathlon, individual athletes still need to make their case for selection. With this win, Beaugrand has just added another argument in her favor.

“It was a pleasure to return to competition and share the podium with Angelica Olmo and Leonie Periault,” she said. “Back to work!”

Watch out for Beaugrand at her next race: the World Triathlon Championship Series Yokohama.