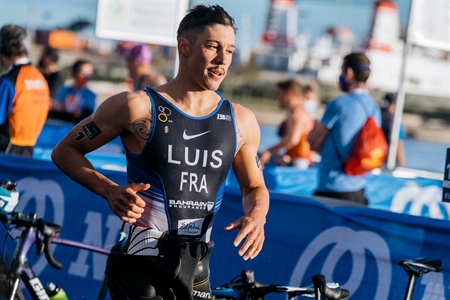 When the postponement of the Tokyo Olympics was announced last year, Vincent Luis took it as a positive. He and the rest of the field would be able to train on a more level playing field with another year to prepare, versus having to race the Olympics off the back of preparation hampered by quarantine restrictions and the threat of infection in a global pandemic.

Vincent not only wants to win, but to do so racing the world’s best. He says, “It was like a relief for me. Okay, now we have one more year, everyone is in the same situation and we can prepare. I’ll be one year older, but it’s fine.”

At 31 years old, the Frenchman is on track for his third Olympic appearance. After finishing eleventh in London and seventh in Rio, he took the lessons learned to bring his performance to new levels. Steadily climbing the WTS rankings year-on-year with consistency, he showed he could also perform in big races by winning both the 2017 and 2018 Grand Finals. In 2019, he not only became World Triathlon Series world champion, but also played a pivotal role in France winning the Mixed Relay world title to become a world champion twice over.

In 2020 amid a disrupted season he grasped the opportunity to defend his individual world title in Hamburg, kicking off a four-race winning streak out of four starts in the year’s World Triathlon racing.

According to France’s selection criteria, his WTS #1 ranking for 2019 as well as #2 ranking in the Olympic qualification standings should virtually assure Vincent a place on the Tokyo starting line. France is also atop the mixed relay Olympic qualification standings, which means the French team are automatically qualified and will contend for the first ever Olympic gold medal in mixed relay.

Bahrain Endurance 13 team CEO Chris McCormack says Vincent has dominated this Olympic cycle and is the favorite to win. “He’s flawless across all disciplines; I think he’s at his athletic peak over the Olympic distance. He’s a big race performer, a dual individual world champion. He’s fast, he’s tactical, and I think he has the opportunity not only to win the individual event but potentially take two gold medals because I think the French would be very hard to beat in the mixed relay.”

Despite all the palmares he’s already collected, Vincent’s hunger to win and be the best remains unquenched. He’s certainly one to watch for when all the world lines up to race in Tokyo in August.