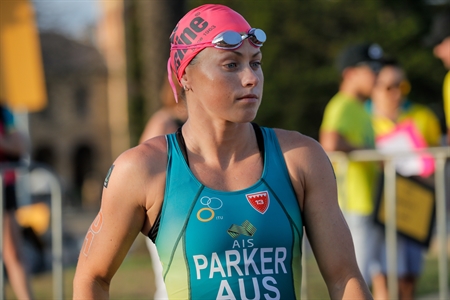 Reigning paratriathlon world champion Lauren Parker has set her sights on not just one but three gold medals at the Tokyo Paralympic Games: paratriathlon as well as hand cycling time trial and road race.

This week at the Road National Championships in Ballarat, Parker will attempt to qualify for the Australian para cycling team by competing in the time trial on Thursday and the road race on Saturday.

Due to restrictions brought about by the COVID-19 pandemic, Parker is unable to travel internationally and race her would-be competitors. Instead, Cycling Australia have challenged her to beat the hand cycling world champion’s speed, time, and power output to prove herself worthy of a spot on the team.

“Cycling Australia are only allowed to take five para cycling athletes to Tokyo; at the moment they have four gold medal potentials and one podium potential,” says Parker. “At the moment they don’t have any hand cycle athletes. They’re all other disabilities. I’m not necessarily racing them, they’re in other categories -- but I have to prove I’m a gold medal potential for me to make the team. That’s why I’ve got to beat the world champion’s data on a similar course.”

Parker took on the challenge in response to the postponement of the Games last year, choosing to find the positive in a negative situation.

She says, “I thought given I’ve got another year, why don’t I try to qualify for the para cycling team for Tokyo? It’ll be a 16-kilometer time trial race and a 50-kilometer road race for Tokyo. So hopefully I’ll have the three events: the paratriathlon, two days later the time trial and one day later the road race. So I’ve really got to prove that I can back up.”

While Cycling Australia have also assessed her based on time trials last year, the outcome of these two races this week will make or break her chances of selection. “It’s the Cycling Nationals so it’s the most important.”

Against conventional wisdom Parker has struck her own path, continuing to train as she normally would without adding extra emphasis on her bike training. “The sessions have been changed a bit within the session, but I’ve stuck to my same triathlon training plan,” she reveals. “It’s only going to help my triathlon, make me stronger for the bike in the triathlon. I feel the strongest I’ve ever felt, my training has been really consistent, and if I don’t make the cycling team I’ve still got the triathlon which is my passion.”

Parker will begin her Olympic campaign in Australia with races in Newcastle, Devonport, and Mooloolaba over the next two months. She states, “I’m really excited about getting back on the start line because I haven’t raced in over a year. It would be good to see where I’m at against other competitors.”

She then aims to defend her world title in Milan and race in Yokohama and Montreal before heading to Tokyo. But one goal remains foremost in her mind.