Clean sweep for BE13 in Italy 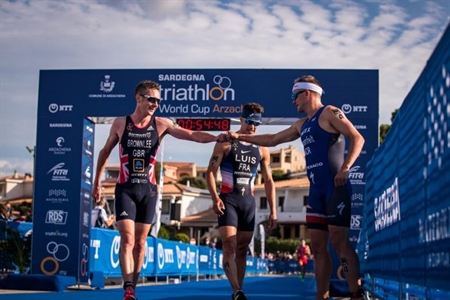 The Bahrain Endurance 13 scored another winning weekend in Europe, locking out the podium

in Italy and taking the crown in Croatia.

Vincent Luis beat out team mate Kristian Blummenfelt in a dazzling burst to the finish line at the Arzachena World Cup. This makes three consecutive wins for the flying Frenchman, proving he is unbeatable over short course racing. Blummenfelt’s silver finish shows his health has bounced back after food poisoning took him out of contention at the previous World Cup race in Karlovy Vary. Alistair Brownlee took the final spot on the podium; the Englishman had won this race last year, albeit on a different course.

Luis led out of the water after the 750-meter swim and paced himself within the front pack on the 20-kilometer bike leg that featured a steep climb and descent on each of its three laps. While Blummenfelt and Brownlee missed the lead group out of transition, they quickly made up the distance to join Luis out front. They then drove the pace on the flats and up the hill, attempting to break up the group and gain some advantage heading onto the five-kilometer run.

However, Luis kept in touch and in the end it was he who emerged onto the run course first. Brownlee with a sluggish transition soon found himself battling for third as Luis and Blummenfelt dueled each other.

Each time Luis surged, Blummenfelt had an answer. But when Blummenfelt put on the burners with 500 meters to go, Luis tapped that famously brutal finish kick to put daylight between himself and the Norwegian powerhouse. He stopped the clock at 54 minutes, 24 seconds. Blummenfelt crossed the finish four seconds later, while Brownlee summoned his strength on the run to put himself across the line 16 seconds after that.

“You know that’s a good feeling when you win every race you start,” said Luis. “I wasn’t that confident coming here; it’s a hard course, it’s really different than what you’re used to doing but my coach managed the training really well. We’re already in October but I feel good, there’s Valencia (World Cup) coming in a month so I’m looking forward to the next races and it’s good that ITU put on this mini-series… I’m pretty keen to try to win it.”

He further revealed, “The bike was tough. Kristian and Alistair made it tough and I just wanted to stay with the leaders, I did not want to try to break away. Kristian tried a few times and I had to bridge the gap, that was tough on me but I really wanted to have a good run after the bike and I did. Kristian was really strong but once again I had my strength with the sprint finish so I tried to lead and set a good pace. With one kilometer to go he wasn’t really pushing the pace so I knew it was mine.”

Blummenfelt conceded, “He was strong on the run, as I reckoned. It’s really tough to beat him on a 5K so I just didn’t have the extra legs; I felt like I could keep going at the same pace but that finish line just came too quickly.”

Brownlee admitted feeling dull around the edges due to lack of racing. “I thought I’d have a big effort somewhere in the race and be able to break it up, but in reality I used all that effort up on the first lap. I was 15 seconds down by the time I got to the top of the first hill, and that was a big effort there.... I just couldn’t get my shoes on quite well and that cost me a bit for sure and just a shame being race-rusty. I’m hoping to get a few more races in and be a bit sharper.”

With all three aiming for the Tokyo Olympics, their performance over the tough Sardinian course bodes well for next year.

David Plese in his first triathlon of the season took the win at the Zadarhalf Triathlon in Croatia. He finished the middle distance race in 3:45:15 with a comfortable lead over the rest of the field. The race’s seventh edition had originally been scheduled for May.

“Good, fast, and strong was my experience today. All credits goes to race organisers to make this event even possible!” said Plese.