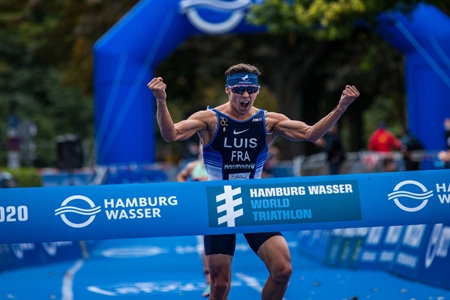 Vincent Luis headlined a fantastic weekend of racing for the Bahrain Endurance 13 team, defending his world title in Hamburg on Saturday.

The speedy Frenchman executed a masterclass over the sprint distance, finishing in 49 minutes, 13 seconds. He pushed the pace up front with Alistair Brownlee during the swim to exit the water in third. He then rode well with compatriots Leo Bergere and Dorian Coninx to close on Brownlee and brother Jonathan and form a lead group of eight including dark horse Vasco Vilaca. The pace at the pointy end was high, alienating the chase group led by Kristian Blummenfelt. On the run, Luis, Bergere, and Vilaca left the competition in the dust, forming the men’s podium; the only question was, in what order would they finish? With 900 meters to go, Luis found the extra gear he needed to surge away and cross the finish as the clear winner.

With this win, Luis brings the Bahrain Endurance 13 world title tally to 20.

He added, “I knew I was in pretty good shape; I spent six weeks in Font-Romeu and I was doing a lot of sessions with the best guys in the world because they are all in my group with Joel Filliol... You don’t need to race when you have the best in your group.

“I have the two young guys with me so I was a bit scared. I know that my sprint finish is good. I really wanted to push the pace with one kilometer to go and I was lucky enough to drop them.”

Despite athletes from other countries being unable to compete due to quarantine restrictions,  the competition had been fierce with the Top 16 men all clocking in under the 50-minute mark. Fellow Bahrain Endurance 13 teammate Brownlee ultimately finished 9th, while Blummenfelt had done the lion’s share pulling the chase group up to finish 13th, only 38 seconds back from Luis.

Vicky Holland finished 31st in the women’s race. She said, “I put in a massive block over the winter and raced well in March, full of positivity and confidence for what was to come. To say this year has been ‘derailed’ is a bit of an understatement, and I know I’m not the only one who feels that… I considered at length whether I even wanted to travel and race here but decided I wanted to come and have a go. I knew deep down I wasn’t really ready and I got what I deserved on that front. Although I’m far from happy with my result yesterday, I’m still proud I gave it a go and happy to head home for some time off having put a full stop on the 2020 season.”

Blummenfelt made history as part of the first mixed team relay fielded by Norway. His effort as the second athlete in the relay brought the team up to the front of the race with a massive gap to the rest of the field. Norway eventually finished a fantastic 4th behind France, USA, and Great Britain.

Brownlee backed up from the race in Hamburg to travel across the pond back to the United Kingdom to race the famously difficult Helvellyn Triathlon on Sunday. With temperatures at times dipping below zero degrees Celsius especially atop the mountain Helvellyn, Brownlee held off a challenge from George Goodwin to win on the day.

Javier Gomez and Ashleigh Gentle feature in further results from the weekend. The Spaniard claimed the top individual place in the French Grand Prix race in Quiberon to bring Triathlon Team Lievin to the top team spot.

With the past weekend’s major return to racing, the Bahrain Endurance 13 team share the sentiment.