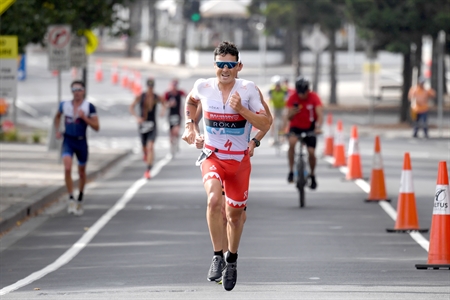 Javier Gomez will return to racing Super League Triathlon this weekend, albeit over a very different format than the last time he appeared in the race series in 2017. He will toe the line as one of 10 men and 10 women to race the SLT Arena Games happening in Rotterdam, the Netherlands on August 23.

This is an innovative hybrid of real-world and virtual racing. The athletes will be racing Super League’s Triple Mix format: three rounds of swim, bike, and run, but in different orders each round. The swim leg will be held in an Olympic-sized pool while the bike and run legs will be completed on the Zwift virtual race platform using smart trainers and self-powered treadmills.

After having trained for several weeks for the ITU European Championships, Javier was disappointed when their cancellation was announced. The SLT Arena Games will give him a platform to put that fitness to the test racing against the world’s best especially as he continues preparing for next year’s Tokyo Olympic Games.

He says, “I’m excited about this new format in Super League and getting to the start line again. As you know, it’s not my favorite distance. As a junior, we only raced Olympic distance and my whole life I trained for that. Now that I’m in my 30’s, the distances are starting to get shorter and shorter. But I really love Super League and that kind of racing. It’s going to be fun to be on the start line and feel the nerves of racing and put on a good show for the people watching.”

Javier will also be racing the French Grand Prix in Chateauroux just a day prior to the Arena Games for Triathlon Club Liévin, competing against Bahrain Endurance 13 teammate Kristian Blummenfelt who will be racing for the Valence Triathlon Club.

As parts of the world are cautiously reopening for sport, more racing is now on the horizon for the Bahrain Endurance 13 team. Kristian will start at Challenge Davos next weekend. Ashleigh Gentle and Lauren Parker have targeted Ironman 70.3 Sunshine Coast for the week after, on the same weekend Vincent Luis and Vicky Holland are set to race World Triathlon Series Hamburg.