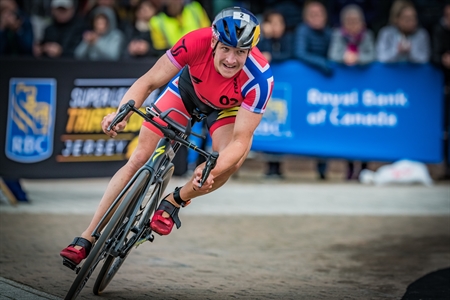 When the International Triathlon Union decided to suspend the racing season until the end of April due to COVID-19, many athletes were instructed to continue preparing as if the Olympic and Paralympic Games would be held as scheduled, despite growing uncertainty that COVID-19 as a global concern would be resolved by then.

With the joint announcement by the International Olympic Committee and the Tokyo 2020 Organising Committee that the 2020 Olympic Games and the succeeding Paralympic Games have been postponed to no later than Summer 2021, athletes now have a clearer roadmap ahead.

We caught up with two of our Bahrain Endurance 13 athletes to learn how they are handling training indoors and what their mindset is to get through this.

“I think it’s very important these days that as an athlete we do respect that global health and safety is more important than ‘just’ sport,” says Kristian Blummenfelt, who is home in Norway after attending training camp in Phuket, Thailand through the early part of the year. “It’s important that we all respect the rules and guidelines we have been given, so we can defeat this virus together and come stronger out of it.”

He adds, “I was really looking forward to travel to Super League Triathlon NEOM in Saudi Arabia to race in my new red colour trisuit to represent Bahrain Endurance 13 for the very first time, but understandably that race got postponed.”

Meanwhile, he has continued to train. He says, “I try to keep a positive mindset and do all the training I can do as good as I can. I do a lot of riding indoors on my turbo, and since all swimming pools are closed I try to compensate with dryland swimming with elastic bands.

“As all my races this year have been postponed or cancelled, I haven’t got the chance to achieve and showcase my form and fitness yet this year. But my time will come, and I will be well-prepared to race when we have overcome the virus.

“My goal is still to win the Olympics in Tokyo!”

Lauren Parker intended to race the Sarasota World Cup, but as the United States began to confront rising cases of COVID-19, the race was cancelled.

She reveals, “I was having to train in my hotel car park until I got a flight home to Australia. Upon arriving home yesterday I am on a strict 14-day isolation so I’m not able to leave my house. I will be training hard indoors though and staying positive… I’m training on my indoor rollers and bike trainer in my home garage, and I am able to do gym workouts at home incorporating swim specific exercises.”

Parker has continued to train as though the Paralympic Games are still on, and the postponement does not affect this focus at all. “I grew up having the dream of one day competing at the Olympic Games. I worked so hard and since my accident, that goal once again arose. I now have the goal of becoming Paralympic champion and winning that gold medal. That is where my focus is and I believe that I will achieve it! I feel excited about being on the start line at the Paralympics with the best para-triathletes in the world.”

No stranger to tough situations in her own life, Parker advises her fellow athletes to stay calm and positive. She says, “Set a goal if you don’t have one and train as though the next competition is on.

“Put things in perspective; if your race is cancelled, overcome that because there are people dealing with worse situations in the world. Find a way to keep training and active. There’s always a way.”