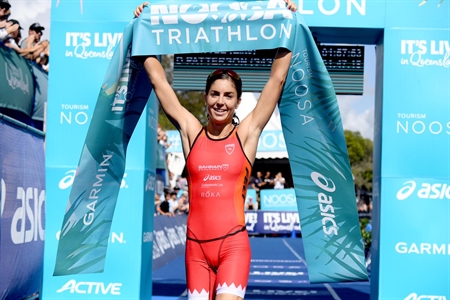 The Queen of Noosa, Ash Gentle, was a woman on a mission at the 37th Noosa Triathlon Multi Sport Festival, and with Bond like precision she dispatched all comers to become the first athlete to win the illustrious Noosa Triathlon title a record seven times.

After a disappointing ITU World Grand Final, Ash was thrilled to be able to bounce back so well, secure the win and record a little bit of Noosa history along the way.

“It was a really fast race. The swim was tough, with rips and big swell so that was challenging. On the bike everyone was really pushing the pace. I tried to do a lot of work and Sarah Crowley came around, then Kerry and Radka. So, I knew I just had to do my own thing on the run. So, I hit the lead early and just tried to hang on.”

“There has been a big build up leading in and I have enjoyed it, but it was definitely good to cross the line first and there was real sense of relief. It will take a while for the seven wins to sink in, but relief is one emotion I am feeling at the moment. I don’t know if I will get used to the title ‘Queen of Noosa’, but I guess I will take it.”

“Next year is massive for me. The Australian team isn’t picked for Tokyo and it is fully discretionary. So, it is all about turning up to races, performing and putting your best foot forward. Noosa isn’t a selection race but it is still a quality race, it is Olympic distance and a good opportunity to show the selectors I am still here and want to go the Olympics,” Ash declared.

The former record holder, Craig Walton was the first person to congratulate Ash on her dominance and longevity.

“Seven in a row is amazing and no matter what way you look at it, Ash is an amazing athlete and thoroughly deserves it. Seven wins is seven wins and you can’t take that away from anyone. It is a great, great effort. I don’t know how old Ash is, but old is definitely not the right word, she is still young. One hundred per cent she has more wins in her, at least another two or three, so ten is not out of the question, if she plays her cards right.”