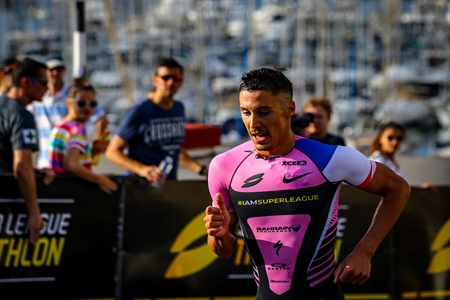 Vincent Luis has once again taken the win at Super League Malta in an uphill sprint to the finish, reminiscent of the way he won the same event last year.

Super League Malta was raced over two days, with two semifinal heats on Saturday to determine qualifiers leading into the Sunday finals. Luis won his semifinal while Kristian Blummenfelt topped his. This set the stage for dramatic neck-and-neck racing between the two in the final as the athletes raced a 3.5-kilometer individual time trial, and then a 300-meter swim, four-kilometer bike, and two-kilometer run done twice with no breaks.

Once again it was the Frenchman’s trademark final surge that put him over the line ahead of his rival. “I’m really happy [with the way I raced]. It was a long season and after only one round I was already really struggling,” revealed Luis. “[Blummenfelt] tried to drop me with about one kilometer to go, but I resisted and as I always say when I can see the line, it’s not a good sign for the guy with me. Once again with 200 meters to go I went all out.”

This win in combination with his triumph at Super League Jersey three weeks ago further seals Luis’ place atop the Super League Triathlon championship leaderboard, as the race series goes into hiatus leading into the 2020 Tokyo Olympic Games.

Luis has his sights firmly set on the Games. He said, “I won everything this year: [ITU] world champion, I’m leading Super League with a comfortable gap on second, so I’m super happy and I can’t ask for more, but next year is really important. I want an Olympic medal, I’ve never had an Olympic medal and never been close to having one, so I’ll do my best for next year.”

Even as Luis concludes his racing season, Javier Gomez has been building towards his own big finish to the year by competing Ironman Malaysia this Saturday. This will be the Spaniard’s third career Ironman, after his debut over the distance in 2018 finishing second at Ironman Cairns and subsequently racing the Ironman World Championship in Kona.