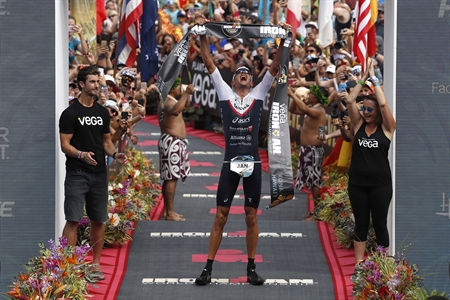 The choppy conditions in the 3.8-kilometer swim in Kailua Bay favored the strong swimmers. Frodeno and Bahrain Endurance 13 teammate Alistair Brownlee tucked in behind swim leader Josh Amberger to exit four and five seconds respectively behind his blistering 47:28.

Onto the 180-kilometer bike course, Frodeno and Brownlee worked with the front pack of five athletes including Amberger and Tim O’Donnell, growing their lead versus the chase pack to two minutes, 31 seconds by the time they hit the Hawi turnaround. While Brownlee picked up a flat rear tire, a quick change had him chasing back to join the men’s leaders.

Frodeno then stepped on the gas to gap O’Donnell by more than two minutes going into the bike-to-run transition with a bike split of 4:16:03. This gave Frodeno some buffer to the storming chase group that included fellow German and previous Kona champion Sebastian Kienle.

Out on the marathon, Frodeno continued to build what would be an insurmountable lead. Combined with the blistering swim and bike splits he had laid down, his 2:42:43 run split took him to the new course record amid the roar of the crowd at the finish line on Ali’i Drive. O’Donnell took second, while Kienle snatched up third.

Frodeno said post-race, “Honestly, this last week has been such a rollercoaster. I got so many messages and it just made me realize that for all the nerves and all the hard work, it’s just the best feeling to be out here on race day, to be able to, for a minute or two be able to appreciate it.”

After the frustration of walking the marathon due to back pain in 2017 and missing 2018 entirely, he was grateful for the chance to compete on the sport’s biggest stage once again. “I don’t care about the record. It’s fantastic but we all know it was a great day. Two years in a row of fast times and it’s a championship, it’s the Wimbledon of our sport. It’s the greatest feeling in the world and you know, after walking here two years ago, it’s a good feeling running four-minute kilometers.”

Meanwhile, Brownlee got off the bike in sixth place and ran well for the first five kilometers until the wheels fell off. He held on to finish in 21st place for his Kona debut and what was technically his first time to cover the entire Ironman distance.

Brownlee recounted, “The race was going absolutely perfectly up to Hawi when I got a back flat, changed that quickly with the new twist-and-pull but I guess it cost me a minute. And then I rode quite hard to get back to the front, and that was fine, legs still felt quite good. And then I went through a tough patch when Frodeno pushed hard coming back towards the airport. I kind of stuck with him. Got running, felt okay first five kilometers and then it went downhill from there. By 12K I was in a bad place and just trying to hold onto every position, and then just trying to finish. That last two hours was by far the worst two hours of my life.”

David Plese finished a few places behind Brownlee in 26th.

While Daniela Ryf’s attempt to defend her Ironman World Championship title did not go according to plan, she never surrendered. Visibly labored in her running stride on the closing kilometers of the marathon, she still fought to finish in 13th place.

“A very tough day for me after feeling flat and nauseous due to a stomach bug which I caught a few days ago,” Ryf said. “Giving up was never going to be an option, so I dug deep and gave it everything I had. I’m okay, just disappointed I couldn’t show the form I was in today. But I guess every long-distance athlete has to experience one of these humbling races, where the day feels very long. The pain was real, but the support on race course was even more real. I definitely felt the motto ‘Ohana’ of the triathlon family out there... And well done to Jan Frodeno. So happy for you. Best of all time.”