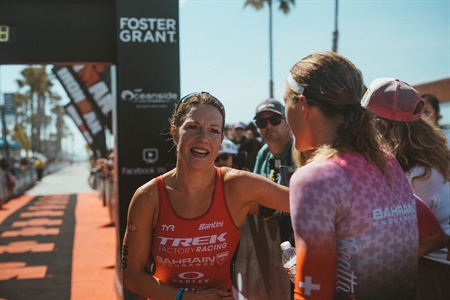 All eyes are on Nice at the Ironman 70.3 World Championship this weekend as the Bahrain Endurance 13 fly the racing red on the notoriously tough course. Daniela Ryf, Holly Lawrence, and Javier Gomez aim to add another 70.3 world title to their collection, while Alistair Brownlee and Ben Kanute seek the title for the first time.

Ryf is going for an unprecedented fifth consecutive title, and has been unstoppable all season long. However, Lawrence came second to her at Ironman 70.3 Oceanside and has won the Middle East, Asia Pacific, North American, and European 70.3 championships against fierce competition. The 2016 champion has made a smashing comeback to racing after breaking her foot early last year and sitting out most of the season in recovery and rehab.

Lawrence says, “It was around September when I was just out of the boot for the first time able to walk when 70.3 Worlds was going on last year, which I didn’t even watch because I just tuned out of triathlon at all -- I couldn’t even bear to watch it. And then did my first race back in December in Bahrain and won it and had a good year since. I think I’ve won four regionals since then. I proved I was back, running faster than I was before. I proved to myself that this injury is totally in the rear view now.

“I wanted to build throughout the year and I’m really happy with how everything has gone.”

“At least this time it’s not very far, I’m only traveling from Switzerland to France,” says Gomez. “I remember three years ago it was from the United States to the Netherlands and that was more complicated, but we’ll see how the body recovers because it’s going to be a very tough race, very hilly, and racing the best in the world. I’ll just go race my race.

“I haven’t seen the Nice course yet but I’ve seen the maps and the elevation and it looks very challenging.”

Brownlee overtook Gomez on the run last year to become vice-champion. This year, Brownlee is back with a vengeance and hopes to get a lock on the title.

“The 70.3 World Championships is my priority this year. It’s the race I really want to win,” Brownlee reveals. It certainly seems as if the Nice race is built for his strengths, especially on the bike course. “It’s got lots of climbing and I’m really good at climbs. It’s quite technical potentially on the descent as well so I’m looking forward to that. I enjoy going fast down hills and handling my bike. I think it could be a good race and could be very competitive.”

Kanute just missed out on a podium spot last year, finishing in fourth. But he has already been in striking distance of the win before, coming runner-up to Gomez in 2017. He is primed and ready to make another run at the title.