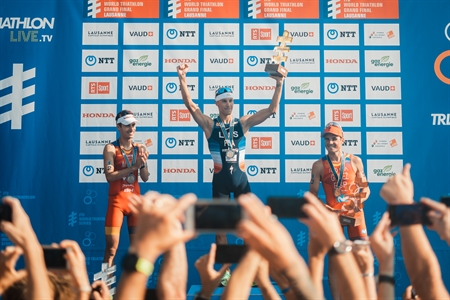 Vincent Luis and Lauren Parker etched their names into history this weekend in Lausanne, taking home world championship titles in triathlon and paratriathlon.

Luis became the first Frenchman to win the ITU triathlon world title since the inception of the six-race World Triathlon Series in 2009, while Parker became the ITU Paratriathlon World Championship.

Luis had previously won the junior world title in 2008 and ended 2017 and 2018 strong winning the Grand Final races, so taking the world title home was his top priority this year. His consistent performance across the World Triathlon Series this year propelled him to the top of the WTS points leaderboard. He sealed the win with a Top 5 finish at the Grand Final.

“It’s amazing. I think I still can’t believe it. I’ll see tomorrow when I wake up if I’ve been dreaming,” said Luis post-race. “That was a really tough race, I can’t believe it. The final 3km seemed like 10km for me, but the crowd was amazing, my parents were here and I just pushed really deep for them… I was just racing for my life at the end.”

While he had positioned himself well through the 1.5-kilometer swim, fierce competition alongside the likes of Mario Mola and Bahrain Endurance 13 teammate Javier Gomez kept the competitors bunched up throughout the 40-kilometer bike ride. On the run, Kristian Blummenfelt broke away from the pack early in final 10-kilometer run as Mola and Luis ran together. In the final kilometers, Mola broke away from his training partner to move up into second behind Blummenfelt as Fernando Alarza and Gustav Iden shot forward into third and fourth. Luis settled for fifth on the day, which was more than enough to cement his position atop the series standings.

Luis commented, “I really tried to follow Mario as long as I could. With two laps to go I got dropped. I knew I had to finish sixth if he wasn’t first, or I just did my best to stay in the top six and fifth is good enough so I’m pretty happy with that.

“Whatever you’ve got in your life, you can’t buy a world title. You just have to do it to realize how good it is and how much adrenaline you have.  Beating guys like Mario and Javi… I’m really pleased to put my name next to them.”

Gomez crossed the finish line 20 seconds behind Luis, in sixth on the day but ending the year ranked #3 in the world. He said, “It’s my ITU World Championships podium number 11 (5 gold, 4 silver, 2 bronze). Not a great race for me yesterday, though. Felt average all day, but gave my best to defend the podium spot.”

It wasn’t the way that Vicky Holland, defending WTS World Champion or Ashleigh Gentle 2018 Grand Final race winner wanted to end their seasons, finishing 18th and 22nd respectively but are looking towards 2020.

Less than two years after she made her paratriathlon debut, Lauren Parker holds aloft her first paratriathlon world title for Australia on the back of a perfect day of swim, bike, and run -- and more than a year of hard work training and overcoming health hurdles, including spinal surgery just eight weeks before racing in Yokohama in May.

She said, “I can’t even describe or put into words how I’m feeling. I’m just so happy. I’ve put in a lot of hard work towards this moment and all year this has been my focus. To come away with ‘World Champion,’ it’s so unreal.”

Parker went on the attack from the gun and led wire-to-wire in the race for the PTWC category. While the swim has always been her strength, Parker also roared through the hilly bike course and kept the pace high during the run to cross the finish line more than two minutes ahead of the field.

“I got out of the swim really happy and in good spirits and onto the bike, and I just kept going from there. I just felt great,” she said. “In the run section, in that last lap I knew I had it in the bag. I knew how far ahead I was from second place. I just was able to celebrate.

“I’m so happy to make all my family and friends proud and Bahrain Endurance 13 proud as well,” Parker concluded.

In only their first year of being on the team, Luis and Parker have now brought the Bahrain Endurance 13 total to 17 world championships.