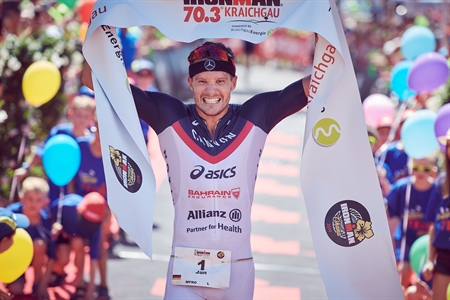 Bahrain Endurance 13 powered to wins this weekend with Daniela Ryf, Jan Frodeno and Alistair Brownlee claiming titles in Switzerland, Germany, and the Netherlands.

Ryf led wire-to-wire to win her sixth Ironman 70.3 Switzerland title. After swimming the 1.9-kilometer swim in Lake Zurich in 25:12 and beating the closest woman out of the water by 73 seconds, she rode 2:15:44 on the hilly 90-kilometer bike course to grow her lead to more than eight minutes. She then ran the day’s second-fastest half-marathon in 1:24:23 to break the tape in 4:08:34.

Frodeno showed no sign of rust racing his first half-ironman of the season at Ironman 70.3 Kraichgau. After swimming 22:40 to emerge third, he took to the front of the race early on the bike, which he completed in 2:14:57. On the concluding half-marathon (1:12:09) he was in a completely different class as he built his lead from three minutes to 12 minutes by the finish tape.

Brownlee backed up from his success at the Cagliari World Cup two weeks ago to win his fourth ETU European Championship title. After putting himself in good position over the swim and bike legs, he unleashed his run and outdistanced the field by 23 seconds.

“Well-chuffed to win my fourth European title yesterday. It’s been a long road to get back to start lines. Thank you for all of the support out there,” said Brownlee. “Home race in Leeds next weekend to get ready for now.”

He will seek to take this momentum going into WTS Leeds, where Javier Gomez, Vincent Luis, and Vicky Holland will join him on the starting line.

Meanwhile, Ben Kanute and Ashleigh Gentle will race the iconic Escape from Alcatraz triathlon. Kanute will need to make a quick turnaround to mount his title defense as he comes off a 12th place finish this past weekend at The Championship at Challenge Samorin. Gentle will be marking her first appearance back in San Francisco Bay since she won the title in 2015, and is raring to race after three weeks at home in Australia.