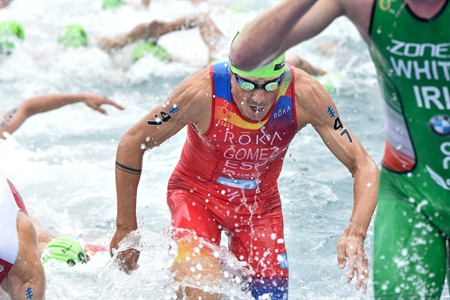 World champion triathletes Javier Gomez and Terenzo Bozzone look to add another world title to their respective resumes as they line up to race the Pontevedra ITU Long Distance World Championships in Spain this weekend.

The Long Distance World Championship is held across distances ranging from double to triple the standard distance course; this year, it will be a 3-kilometer swim, 112-kilometer cycle, and 30-kilometer run.

This will be Gomez’s maiden attempt at the long course world title. He says, “It will be very special to compete in my hometown this Saturday. Long distance is not exactly what I’m training for at the moment, but can’t miss such a great event at home!”

Bozzone raced previously in 2013 in Belfort, France and came second on a shortened course with a 9.5-kilometer run replacing the swim due to cold weather. He arrived in Pontevedra to slightly warmer conditions. “Finding some good rhythm here,” he says. “Going to be a shock to the system when I pluck up the courage to jump in the river which is sitting at 14 degrees [Celsius].”

After coming second in 2016, then winning in 2017, Holly Lawrence was unable to race Ironman 70.3 St. George last year due to sustaining a foot injury at Ironman 70.3 Oceanside. This year she is fully healthy and back with a vengeance, ready to reclaim her title.

Jan Frodeno is lining up at his first race of the year at the Buschhütten Triathlon Siegerland Cup, which kicks off the racing season in Germany. Throughout its 32-year history this standard-distance race has been graced by many of Germany’s triathlon stars who return year after year to swim 20 laps in a 50-meter pool, followed by 40 kilometers cycling on the highway, and eight laps of 1.25 kilometers running through the town. This year might be the one Frodeno gets to add his name to the winners’ list.