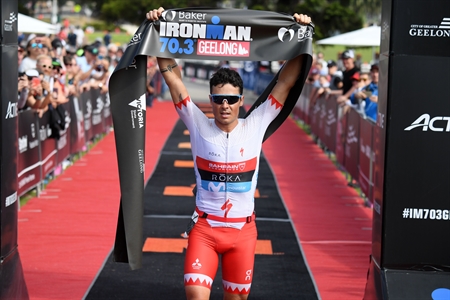 The two-time Ironman 70.3 champion and five-time ITU world champion came into the race a strong favorite and showed no signs of off-season rust as he broke the tape in 3 hours, 45 minutes, 23 seconds, four minutes ahead of the rest of the field.

Gomez emerged from the 1.9-kilometer swim a mere second behind the leader Josh Amberger. However, as Amberger was delayed in transition by a mechanical issue, Gomez and four other athletes capitalised on this and pushed out in front on the bike. While Amberger managed to reel them in by the end of the 90-kilometer cycle course, Gomez left them all in the dust with a blistering 1:11:36 half-marathon, the day’s fastest run.

“It was perfect conditions, perfect temperature, no wind and a fast course. The first couple of kms on the run I didn’t feel very good, so I set a more comfortable pace and gradually increased the speed and was then able to control the race.”

“At the 10km of the run I felt good, I had a decent gap so I knew the race was within my grasp.  I was a bit conservative because I have a lot of racing coming up but overall it was a very consistent race and I am happy with the win.”

“It is great to be qualified for the IRONMAN 70.3 World Championship already so I can focus on my next few races and I don’t have to worry about that anymore. I can just prepare and train for that race which is one of the main focuses of the year. Tokyo 2020 is also a big focus and I will see how the first races of the World Triathlon Championship series go and hopefully I can qualify for Tokyo and be competitive there,” Javier said.