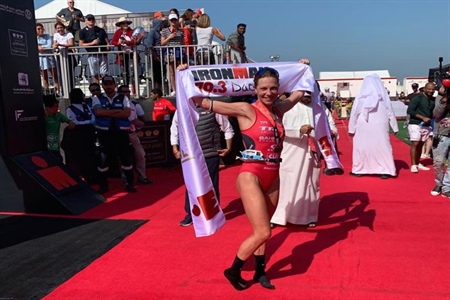 Lawrence emerged from the 1.9-kilometer swim at Jumeirah Beach in 24:24, the 10th best split overall and 98 seconds ahead of the women’s field. Once on the bike, she pushed gears hard on the 90-kilometer cycle circuit that ventured on a flat out-and-back into the Arabian Dunes to record a 2:11:04 split and pull ahead by nearly six minutes by the time she entered the bike-to-run transition. She then ran a 1:20:27 half-marathon to win comfortably in 4:00:04.

While defending champion Anne Haug put up a huge challenge through the course of the race and ran the fastest half-marathon in the women’s field (1:16:23), she crossed the finish just over a minute behind Lawrence.

After a broken foot that needed surgery and recovery through most of 2018, Lawrence has shown she is well and truly in form backing up her win at the Ironman 70.3 Middle East Championship Bahrain in December.

With this win she has also launched her bid for the Nasser Bin Hamad Triple Crown and its million-dollar bonus prize. The series founded by His Highness Shaikh Nasser Bin Hamad Al Khalifa will award one million dollars to any athlete who wins Ironman 70.3 Dubai, the Ironman 70.3 World Championship, and the Ironman 70.3 Middle East Championship Bahrain within one calendar year. Daniela Ryf won the first Triple Crown in 2015, and previous contenders include Bahrain Endurance 13 teammates Javier Gomez and Terenzo Bozzone.

Dubai, United Arab Emirates | Normal Event | Ironman 70.3
add to calendar
IRONMAN 70.3 Dubai takes in the shadows of the iconic Burj AlArab and in the waters of Jumeirah Beach. Athletes begin their day with a swim course begin from Jumeirah public beach, one of the region’s most well-known destination beaches and a getaway for travelers from all over the world. The bike route leaves the city behind and ventures into the Arabian Dunes. The IRONMAN 70.3 Dubai run route will cover three laps (7km each) along a spectator-friendly, packed beach.