Triumphant return for Lawrence in Bahrain 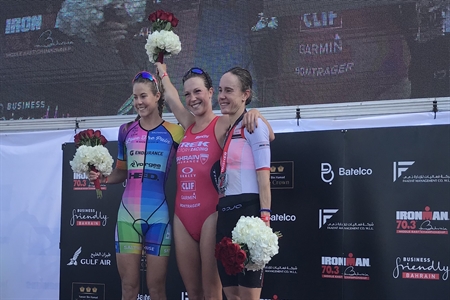 Holly Lawrence took a wire-to-wire win at the Ironman 70.3 Middle East Championship Bahrain today, defending her title and making a statement in her first race back in eight months.

The British athlete broke the finish tape in three hours, 59 minutes, 20 seconds. She showed no signs of weakness from the broken ankle that had required surgery knocked her out of competition since Ironman 70.3 Oceanside back in April.

Lawrence emerged from the 1.9-kilometer swim leg in 22:10, more than a minute ahead of Ellie Salthouse of Australia. After the 90-kilometer cycle course (2:10:43), she had grown that lead to two minutes and 30 seconds. But behind her, fellow Brit Sarah Lewis was flying and making up ground, bumping Salthouse down to third place before running out of road. Lawrence held on to the lead in the concluding half-marathon leg (1:21:55) to hold a 53-second lead ahead of Lewis.

“I really wasn’t sure about my fitness coming in,” said Lawrence. “I knew I was healthy enough to compete, so I couldn’t be happier especially at one of my favorite races.”

She continued, “It was a fast course, but you’re only as good as the competition. I wasn’t too happy with my bike but I’m really happy with my run considering my injury hampered my run [training]. I felt great the whole time.”

The Bahrain course and conditions as well as the quality of competition produced a new world record on the men’s side. David Plese finished 12th with a 3:52:56. Terenzo Bozzone pulled out of the race on the bike leg, tank fully exhausted after two consecutive race weekends including an Ironman.

“I really was hopeful I would be able to finish the year on a high here in Bahrain, but when I pulled the pin at six kilometers on the bike, I just had nothing… I just had to say it was not my day today, live to fight another one. No regrets, I enjoy coming to Bahrain and hanging out with the team.”