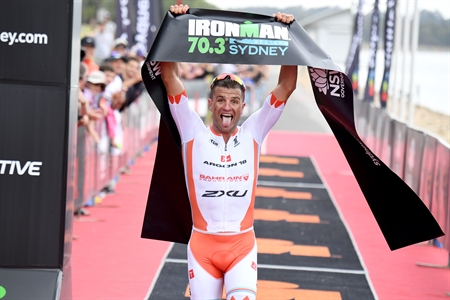 Having to sit out his major race of the year only served to fan his competitive fire as Terenzo Bozzone claimed victory at his comeback race at Ironman 70.3 Western Sydney, five months after a horrendous bike crash ended his plans of racing this year’s Ironman World Championship.

After coming out of the 1.9-kilometer swim in 24:56 (just one second down from the lead swimmer), the Kiwi lit up the 90-kilometer cycle course, riding into transition with a course time of 2:01:09. Only Sam Appleton of Australia was able to stay with him and the two opened an 8 minute, 32 second gap ahead of the rest of the field. As they entered the concluding run leg, it was a proper footrace between the two athletes. Bozzone gained the final edge over Appleton in the closing kilometers, breaking the tape with a 1:15:29 half-marathon and a total time of 3:43:35.

Bozzone clinching the win on the run is even more significant considering he has only had two weeks of road running prior to the race due to an Achilles injury.

He said, “When I started seeing my kilometer splits ticking by at around 3:30 I was very surprised. I did some 1-km repeats on Thursday and I was only just able to dip under this pace. I wasn’t sure how long it would last, but I did feel comfortable and in control.”

He added, “Who knew how long this was going to last, would he get a second wind, would I blow, would my Achilles give me grief? I just kept doing what I could and the gap kept opening.” Bozzone kept the pressure on. While he was unsure of his run fitness, the blow-up he expected never came. “It felt very sweet to get into the closing kilometers with a two-minute buffer and breaking the tape in first place. Hopefully this is the start of many more exciting things to come...

“After the accident, when I woke up in the hospital the thought came into my head: ‘If you want this to be over, this is a pretty good excuse.’ But I didn’t need to think twice about it, or even for a second. I still have a lot of unfinished business in this sport. I love it and I love the adventures we get to do,” he concluded.

Bozzone is expected back on the starting line at Ironman Western Australia this weekend to defend his title, followed the week after by his last race of the year at Ironman 70.3 Middle East Championship Bahrain.