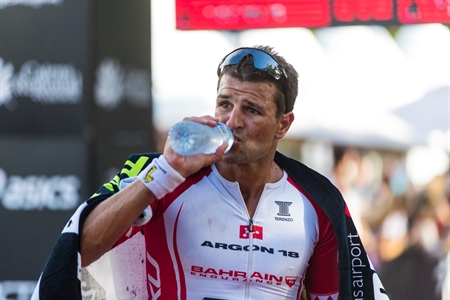 Terenzo Bozzone is looking to pick up some racing momentum this weekend with an outing at Ironman 70.3 Western Sydney, his first race since a major bike accident in July took the talented Kiwi out of commission.

Despite the crash leaving him with lingering effects from a concussion, three titanium plates in his face and a wire in his hand, Bozzone completed his intended training block in Hawaii before making the tough call not to get on the starting line in October for the Ironman World Championship.

He says, “It has been almost six months since my last race, so I am itching like crazy to rev the engine in a race environment. My swim and bike fitness is great as I have been able to build on this slowly since being allowed back into training after my accident. Unfortunately due to some Achilles issue I have been unable to let loose on my running during this period and I have just been able to progress to running on the road in the last week. I am excited that I am finally feeling ready after the concussion and other injuries to get into a race.

“Honestly at the moment I am a little unsure what to expect out there, but I wanted to get some racing on the board before the end of the year to see where things are at and what needs to be worked on going into the 2019 season.”

Bozzone had sped through the first half of 2018 on a hot streak, racking up wins across the Ironman and 70.3 distances across the globe. An athlete who performs better the more he races, he had snatched up the Ironman New Zealand title with a new course record in March, took the bronze at the Asia Pacific Championship in Cairns in June, and looked unstoppable as a contender for the world championship.

Should his Achilles hold up, Bozzone intends to race Ironman Western Australia next week, where he is the two-time defending champion. He adds, “While I would love nothing more than to kick off this block of racing in the same style I finished last year and kicked off this year, I think that will be a big ask with the lack of run training over the past five months. But I do have years of conditioning under my belt and I do love to race, so anything is possible!”