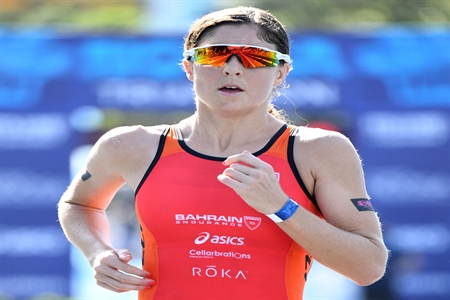 Ashleigh Gentle was the only person that had second thoughts about creating history at the Noosa Triathlon.

But the world No.6 need not have worried as she became the first woman in the 36-year history of the event to claim six Noosa Triathlon crowns.

Gentle, 27, surpassed her idol Emma Frodeno (nee Snowsill), who won five times at Noosa during her golden career, and joined former coach Craig Walton as a member of the six-time champion club.

It was Gentle’s fifth-straight triumph in the elite women’s race around the triathlon and tourism mecca and it came after a trademark blistering run leg with the lady in red showing her rivals a clean pair of heels.

She started the 10km dash around Noosa Parade 38 sec behind the leading group of Radka Kahlefeldt, Natalie Van Coevorden and Annabel Luxford but caught them by the halfway mark of the run and powered away.

“I had so much doubt. A few people had said, ‘You’ll do so well. You had a great race on the Gold Coast (ITU World grand final)’, but that was seven weeks ago,’’ she said.

“I just had to hold as much fitness as I could. I found it really difficult but I’m always so motivated to get here and still be in good shape.

“It’s a relief. I think I say that every year. To win my sixth title, it will probably only sink in this time next year.

“Today I had a terrible swim and made it really hard for myself because I had to really work hard on that bike to reel in the top three girls. Thankfully I pulled back enough time to put myself back in the game.

“I knew those girls were in great form and I’d be up against it. It makes my victory even more special knowing those girls are racing so well.’’

Gentle will be back in Noosa next year to defend her title and hopefully become the first triathlete – male of female – to win Noosa seven times.