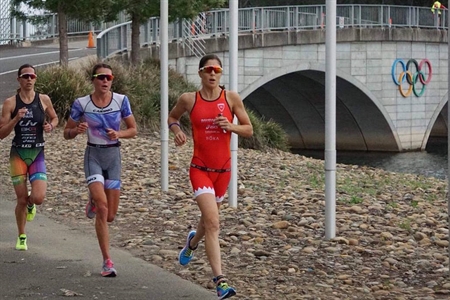 Ashleigh Gentle is on the cusp of becoming the undisputed queen of the Noosa Triathlon. The Aussie triathlete will look to surpass Australian legend Emma Snowsill by winning a sixth Noosa crown tomorrow and equal her former coach and King of Noosa Craig Walton.

The Noosa Triathlon Multisport Festival is world-renowned, and for every Australian triathlete a right of passage. The winners’ list reads like a who’s who of Australian triathlon including Bahrain Endurance 13 CEO Chris McCormack in 2005.

Ashleigh has certainly negative split her season in 2018 – she has been on a roll since the ITU World Triathlon Grand Final in September, where she unleashed the most complete performance of her career and in front of the world, and an adoring Australian public, she fulfilled her potential and announced that she had genuinely arrived.

Ashleigh said the enormity of that win has not been completely processed.

“It is kind of crazy because I know it is quite a while a go now, but I am not sure if it has completely sunk in yet because I have been on a massive whirlwind trip since then. I only had a couple of days on the Gold Coast before I went to the Beijing International, then straight to Jersey for two days of racing Super League and then to Hawaii to support my partner Josh at the IRONMAN World Championship.”

“The win at the ITU Grand Final was probably the best race of my career to date and I think I will better appreciate what I have achieved once I am on a break and I am done with triathlon for the year. For me, that race, was of such high importance because I was treating it like a one off world championship race. I wanted to do well at home and had so many supporters there.”

“I wasn’t happy with my individual race at the Commonwealth Games, so I knew I had another chance to be at my best on home soil and I couldn’t be happier than to execute a race which I am really proud of and do it in front of so many family and friends and long time supporters. It was fantastic,” she said.

Last year Ashleigh won her fifth Noosa title, equalling the record of Emma Frodeno and this year she has the opportunity of going one better to join the King of Noosa, Craig Walton with six Noosa wins.

“I believe a win this year will equal Craig’s record. Craig was a coach of mine a few years ago, so I know how much Noose meant to him. Everyone knows how well he raced at Noosa and really dominated the race, so if I can put my name in the history books alongside his I would be very honoured. It is not something I will think too much about before the race because I don’t want to put too much extra pressure on myself but if I achieve it I will be extremely happy.”

Ashleigh said that as a Queenslander, Noosa has always been part of her DNA but it wasn’t until 2010 that she finally got to compete on the course she has come to dominate over recent years.

“I had just won my junior world championship title in Budapest and I decided that I would do Noosa. I am a Queenslander and I have grown up always knowing about Noosa Triathlon, even when I first got into the sport. Everyone who is a Queenslander knows Noosa, it is just natural to say ‘Of course I will give that a go’.”

“I came second to Caroline Steffan that year. I don’t think I would have been up there on the swim or bike at all, especially being very foreign to non drafting racing, but I think I had, even to this day, my fastest ever Noosa run. I have definitely wanted to be around to do it every year after that. I have been there every year, except one year when I was injured, so this is my eighth Noosa.”

Asheligh said that the inclusiveness of the Noosa Multi-Sport Festival is the key to its success over many years.

“Noosa means a lot to a lot of people and it means a lot of socializing and catching up with old friends and the triathlon community is a special community to be a part of and everyone celebrates that at Noosa,” she said.