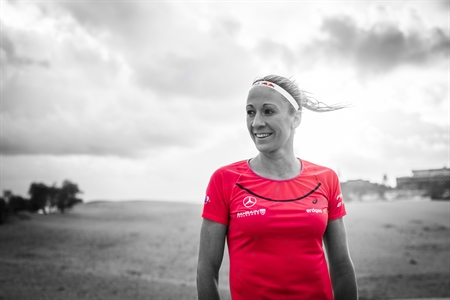 I am trying to find a superlative I haven’t used in writing about Daniela Ryf in the past year. It is extremely difficult, she has been so uniquely consistent and dominant across both half and full Ironman distance for the last four years. Amazing; incredible; unbelievable; tremendous; colossal, I’ve used them all already, and I try very diligently not to be sycophantic.

The last person to beat Daniela Ryf at Kona was Mirinda Carfrae in 2014. The closest anyone has got since is Lucy Charles, last year, a distant 9 minutes behind. In 2015, she won to Rachel Joyce by 13 minutes, the next year she put 24 minutes into Carfrae in second.

Ryf cites her 2016 race as one of her best performances ever. It is easy to see why. Ryf led Carfrae by 22 minutes off the bike and then ran another two minutes into her, running a 2.56, the fastest run split of the day. Many talk about Ryf’s biking ability but she is also one of, if not the fastest women runners in Kona. It was hard for me as a competitor and is as hard for her current competition to see a way of beating someone that dominant.

With Ryf’s goal of closing the margins on the men’s field and surpassing her own past performances this year Ryf has concentrated on limiting the margin on best swimmer Lucy Charles. With less to catch up and Charles’s obvious improvement on the bike (she was able to cling to Ryf’s pace at Ironman 70.3 Worlds) we may see record times come from a scintillating two-up (12m apart). If that is the case, Ryf will start the marathon with fresher legs from some shared workload.

That race scenario depends on many factors, mechanical and health included. Charles may have other ideas than working with her nemesis Ryf to set up a run race that she in all probability will lose. It takes a brave athlete to not settle for second against Ryf. It is exactly what is needed to spice things up in the women’s race.

All this expectation, this pressure, this rhetoric could shake anyone, and Ryf will as always have to navigate the melee of race week and the media frenzy around her but she is good at that and will cope well. An in-form Ryf means that, once again, we would have to look at injury, illness or mechanical failure as her main opponents to victory on Alii Drive.

Let’s not hand medals out prematurely though, champions are human and as such, susceptible such to human afflictions. Frodeno is currently out injured. Don crashed two days before the race last year. Mirinda Carfrae crashed in race week, leading to her withdrawal in 2016. Chrissie Wellington’s late withdrawal in 2010 lurks lucid in the back of our minds too. Ryf, as much as anyone, knows her own vulnerability and claims no title before it is won. She will just be focusing on a low 50ish swim and a 4.40ish bike split, followed by a low 2.50ish marathon. No bells, no whistles, no secrets.