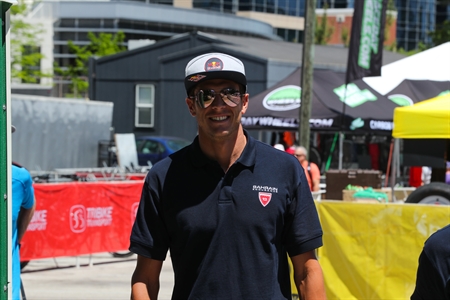 Every year the Ironman World Championships spins us an epic storyline of triumph over adversity. The ultimate feats of endurance look majestic, almost surreal, the triathlete’s neon costumes contrasting with the deep, dark lava rock and backdrop of Mauna Kea.

Champions can both excel and flunk in the extreme conditions. Every year the world’s best triathletes return to Kona for more pain, defeat, or ideally glory.

It, coincidentally, also provides the triathlon industry an unbeatable venue for their paid two-week annual holiday.

The exposure given to the winner of the World Champs is rightly colossal. Second and third will get a camera across the line. Everyone else? Nothing. Nada. Nix.

If fourth to tenth in the world receive little-to-no coverage, at least they receive prize money. Further back to the bulk of the field, incredible athletes, Ironman winners, ‘sub-8ers’, stagger down Alii Drive, unseen and unpaid. Such is the brutality of Kona. Such is the importance of Kona in a professionals' resume.

David Plese is the best-known Slovenian triathlete of all time. His career dates back to 2006.

He is an Olympian, an Ironman Champion and an example of a lifelong professional of triathlon. David has built his life around the sport he adores. It feeds his family and pays his mortgage, simultaneously feeding his passion and challenging him daily.

Professional Ironman is a tough gig but a coveted one. Few have the ability to live it. Plese has forged a lucrative career spanning twelve years of racing that would have seen many fall out of the sport, or at least out of love with it.

For David the year has been spent securing qualification for the biggest game in town. Such is* (*was- there has been a change for 2019) the World Championship qualification criteria. Athletes who have a bad Kona are left in a precarious points position for the following year. They gain zero points for sacrificing at least a quarter of the years (easier) race calendar.

It’s a difficult scenario and a risky strategy for anyone finishing outside of the top fifteen to race the Ironman World Championships. David Plese found himself in such a predicament in 2018. He excelled in rising to the onerous requirements.

David has raced four full Ironman’s already this year. Each has been better than the last. At Ironman Texas he finished 12th; Ironman Cairns, 9th; Ironman Austria, 4th. His efforts cumulated in a brilliant and noteworthy 2nd at Ironman Switzerland.

Basing himself in Bahrain and training alongside fellow Ironman World Championship 2018 qualifier and Bahrain Endurance 13 team leader, His Highness Shaikh Nasser, Plese lives and invests in the flag he flies. Time spent in Bahrain will be time well spent acclimatizing for the heat and humidity of Kona. Coupled with a stint at altitude in the Italian Alps, Plese’s 2018 preparation may be perfect for a successful assault on the World Championships.

With his best effort from four attempts a 17th place in 2016, Plese will be proud to finish higher up the field and showcase his Slovenian heritage to triathlon and popularize triathlon to Slovenians. Slovenia hosted its first Ironman competition last week and Plese would relish a professional category to be added to that race perhaps next year and get a first opportunity to race Ironman at home.

For the time being racing in his adopted home at Ironman 70.3 Bahrain after Ironman World Champs will suffice. Plese has contributed greatly to the exposure and uptake of triathlon in two countries. Madame Pele, the goddess of fire is not known to care much for sentiment but if she did, Plese would prosper.