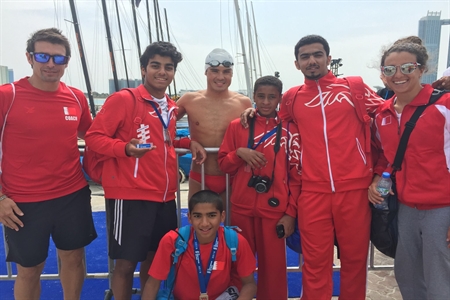 Today the Bahrain Endurance 13 Team has confirmed plans for their support in the development of young high performance athletes from Bahrain to feed into the Bahrain national triathlon team.

The Bahrain Endurance 13 counts the world’s top triathletes among its ranks; this year alone they have won some of the biggest purses in the sport and delivered unparalleled success on the global stage.

As part of team founder His Highness Shaikh Nasser Bin Hamad Al Khalifa’s vision of creating pathways for success in endurance sports, the Bahrain Endurance athletes have each committed to give a portion of their winnings from racing around the world toward the national team’s training and development. This will be ongoing funding provided by the world’s best athletes, opening opportunities for the youth of Bahrain to pursue triathlon as a professional sport.

Current ITU Triathlon world number 1 and five-time world champion Javier Gomez spoke positively about the Bahrain Endurance vision. “His Highness Shaikh Nasser is a very forward-thinking leader, understanding that future success of champions at home comes from igniting a plan and following it through. When the Bahrain Endurance 13 vision was launched this year I was one of the first athletes to put my support behind it. Knowing that I am racing for a purpose bigger than myself is very nice. I am happy to support in any way I can the future development of my sport globally and this is a fantastic way to be directly involved with a high performance program at a grassroots level.”

The Bahrain Endurance 13 will be making their first donation through the Nasser Bin Hamad Foundation for youth and sport and the national team’s head coach Vicent Beltran. These funds will provide much-needed equipment for training and assistance for training camps and traveling to races.

Members of the Bahrain Endurance 13 will also be in Bahrain to conduct camps at the end of the year with the national team. This gives the young athletes a chance to train with and be inspired by world champions and top-ranked athletes.

Beltran welcomes the support. He says, “Our existing funds are limiting the development and participation of our athletes in further competitions, especially the young ones who don't have the basic material for training and racing such as bikes.” He adds, “Your contribution will allow us to plan more races and provide them the full support which will give our athletes the opportunity to represent Bahrain globally.”

These athletes include young Abdulla Attiya, who has been selected for training in the ITU development program in Hungary. He is one of only two Arab athletes in the region -- and the only junior -- chosen for the honor. One of the more promising juniors on the national team, Abdulla will be entering the ETU Junior European Cup and ATU Triathlon African Cup races, as well as the Chicago ITU Aquathlon World Championships.

A two-time Olympian and former national swimmer for Bahrain, Sameera Al Bitar is also part of the squad. To accompany her swim background, her bike and run abilities have already also grown by leaps and bounds since she entered the sport -- but Beltran knows she will flourish even more now. He dreams of taking his charges on a training camp outside Bahrain during the summer months, when the climate at home is not conducive to training.

The Bahrain Endurance 13 counts on its roster Olympic gold medalist Jan Frodeno. He says, “My path to Olympic gold was a product of the opportunities I was given as a young athlete. I think this initiative is fantastic; it gives up and coming talents a chance to train with world-class athletes and hopefully it will spark the beginning of an Olympic dream, just as it once did for me.”

As Frodeno has demonstrated by transitioning to long-course triathlon and winning the Ironman European Championship, the pathway leads from the Olympics to even bigger endurance feats.

Bahrain Endurance 13 team manager Chris McCormack is excited about realizing this part of Shaikh Nasser’s vision. He says, “This is a great opportunity for the youth of Bahrain. It is exposure to the world’s best, clear pathways and funding that will see Bahrain athletes winning world titles over the next few years. The talent exists; it just needs to be exposed to the best, and this is exactly what His Highness so clearly envisioned.”