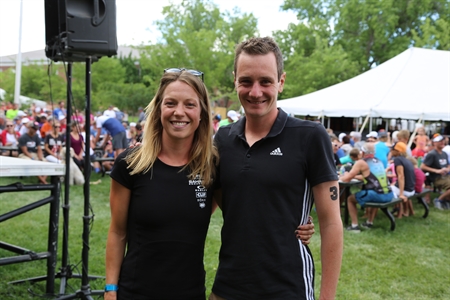 Brownlee proved himself a serious contender for the Ironman 70.3 World Championship by winning the North American pro championship and securing an automatic qualification. The dual Olympic medalist put together a 23:18 swim, 2:01:39 bike, and 1:14:49 run for a new course record of 3:41:58, more than three minutes faster than Jan Frodeno’s record set in 2014.

“The swim was good, went out pretty quick with Ben Kanute and he can really swim. It was perfect for me,” said Brownlee. “I got out on the bike, I just wanted to ride my own race and didn’t get caught, which is obviously what you’re waiting for. The run was okay, I got through the first six miles pretty easy and didn’t want to actually kill myself, but Lionel was coming up pretty quick at the end.”

While the race ended with a win, he says he still has more to learn to race the half distance better. “About my nutrition, I couldn’t get enough and I felt like I didn’t have enough fluid and salt at the end of the road so I had to back off a bit. The good thing about it for me, after the Olympics it’s really nice to have a slightly different challenge.”

Lawrence took away a wire-to-wire win and at one point in the race held a seven-minute lead over the rest of the field thanks to her swim and bike efforts of 24:56 and 2:17:46 respectively. While the other athletes started to make up time on the run, it was not nearly enough to challenge the Ironman 70.3 world champion for the top spot.

While Lawrence made the win look easy, it was anything but that for her. She said, “That course just lands you on your ass, it’s so tough. You get out on the run and you’re like, ‘Oh crap, I forgot how hilly it was!’ I just kept it really steady until that last downhill.”

Brent McMahon finished sixth while Ben Hoffman crossed in 12th, both taking the day to tune up and enjoy one of their favorite races.

“I was coming off an ironman block, trying to get in good shape and blow off the cobwebs for the main race this season, Ironman Brazil,” said McMahon. “A little flat on the bike but I had a good run, got up on my toes, that’s what I was looking for.”

Hoffman quipped, “Nothing special today, I’m probably not as mentally there as I should be. I’ve got my wedding coming up in four days and coming off a big race in South Africa. Probably a couple too many beers between now and South Africa. It’s always fun here in St. George, I love this race, I wouldn’t miss it for the world. A little bit more painful, but I got it done and I’m happy with my finish.”