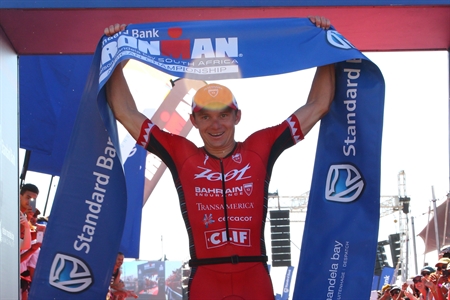 Bahrain Endurance 13 celebrated a triple triumph this weekend, with Ben Hoffman and Daniela Ryf taking top honors at the Ironman African Championship and Holly Lawrence in her first race on the team winning Ironman 70.3 Oceanside.

Hoffman’s successful title defense came with an unexpected bonus as the American logged a new course record and the first sub-8 hour finish on African soil. “I exceeded all my expectations and that wasn’t even on my radar,” he said. “It’s not a super fast course so to do that, I’m just blown away.”

Hoffman exited the 3.8-kilometer swim course a little more than a minute behind super swimmer Josh Amberger. Even as former professional cyclist Cameron Wurf blasted ahead through the 180-kilometer cycle course leading by three minutes, Hoffman stayed controlled in the chase group along with Amberger and Nils Frommhold. Once on the marathon, the real race was on between Frommhold and Hoffman. Frommhold, a previous winner, always stayed within a 30-second gap spurring Hoffman to keep pushing towards a finish time of 7:58:39.

“There’s no doubt that he pushed me to my limit and my best performance on the day for sure,” said Hoffman. “I knew I did the training and I knew I was ready, but I just had to execute and continue to believe in myself. There were definitely a few moments on the run where I started to doubt myself but the crowd support out here lifted me up. It’s absolutely awesome. When I finished first last year I knew there was no question I was coming back to defend, and it’s been a year now and absolutely no regrets. I hope to come back another time next year and defend again.”

On the women’s side, Ryf was tipped to break Chrissie Wellington’s 2011 record of 8:33:56 on a slightly different course. The record still stands; however, Ryf’s finish time of 8:47:01 was good enough for the win, and relegated defending champion Kaisa Lehtonen to second place by seven minutes.

The Swiss accomplished all this despite tweaking her back in the lead-up to the race. “I think it’s a bit of a miracle,” she said. “To be honest, I was preparing to go for 12 hours today, and I was really scared of the swim. I couldn’t swim for about 10 days and today I just hoped that my back would hold together and I’m so happy that everything went kind of the maximum it could go. I could swim quite okay, it hurt the most in the swim and then on the bike I gave my best and it took me awhile. In the beginning I was really struggling and then finally I could push my legs and then the run was also kind of okay and I’m really surprised how it went.”

Ryf exited the water in front, but sat in fourth on the bike until the 133rd kilometer when she made her move to the front. Once there she never looked back, gapping her chasers by three minutes leading into transition and continuing to build the lead from there until the finish line. She said, “I’m super happy and also a big thank you to the crowd today, they really cheered me on and of course thank you to my coach because the last week was not so easy. I was very close to not coming, and I’m really happy I came here to South Africa and I could celebrate such a great win.”

At Ironman 70.3 Oceanside, Lawrence similarly dominated the women’s field. The Ironman 70.3 world champion used this race to knock off the rust after an off-season and long build-up. “This is my first race this season and I haven’t raced for a long time -- it’s been nearly six months. Even though training’s been going well, you never really know how it’s going to go. I haven’t gone that fast for that long for a very long time,” she said.

The California-based triathlete from Great Britain exited the 1.9-kilometer swim on the shoulder of swim leader Jennifer Spieldenner, but took to the front on the 90-kilometer bike ride and recorded the day’s fastest half-marathon to cross the finish line nine minutes ahead of second-placed Ellie Salthouse.

“I was just really pleased that I came off the swim in a really good place and the power numbers kept coming to me and I could keep pushing and it felt good. On the run, I had a bit of a gap and then I was getting some time splits and just didn’t step off the gas and managed to take the win by quite a large margin,” said Lawrence.

While Lawrence’s luck held through the day, Jan Frodeno did not fare quite as well with a puncture early on the bike leg that led to his withdrawal. The German congratulated Lionel Sanders on the title defense, saying, “Hey Lionel, you looked on fire -- congrats man! Sorry my mechanical luck didn't let us duke it out... recover well!”

In China, Fredrik Croneborg struggled with the temperatures at Ironman 70.3 Liuzhou with temperatures at 15 degrees Celsius in the water and less than 10 degrees at the start of the bike leg. The Phuket-based Swede toughed through, finishing in 12th. He said, “I knew the race was a bit of a gamble for me with the colder conditions and i think i need to stick with the warmer races for the future. I struggled already in the swim and had to work really hard just to stay with guys i normally could bike with and after 20 kilometers on the bike i decided to just try to finish the race and did rest of the bike and run controlled as a training day.”

With the year’s racing season heating up, next weekend Javier Gomez will toe the starting line at WTS Gold Coast.