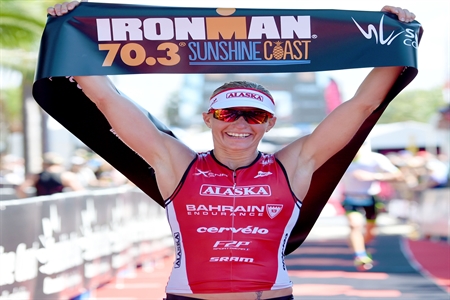 Caroline Steffen mounted a successful defense of her title at Ironman 70.3 Sunshine Coast this Sunday. She has gone undefeated at the distance in 2015 with titles in Vietnam, Cairns, and the Philippines.

The Swiss Miss said the back-to-back win in her adopted hometown of six years was important for her. “As the local girl, ambassador, and defending champion, I felt like there was no other option. I had a plan how that race was gonna unfold and how I have to race to win. I stuck to my plan and walked away with the 19th Ironman 70.3 win of my career.”

Third out of the water at just half a minute down from Radka Vodickova, Steffen quickly bridged the gap on the bike and pulled away from the field along with Annabel Luxford. Once on the run course, Steffen stayed well ahead of Luxford to finish in front by more than two minutes.

Steffen will take this confidence forward to the last few weeks of her Ironman World Championship preparation. She joins fellow Bahrain Endurance teammate Sebastian Kienle in Kona this week.

In the men’s field, Josh Amberger set the tempo with a swim that saw him first out of the water. He made the rest of the field work to keep him in sight on the bike, with Terenzo Bozzone, Luke McKenzie, and Tim Van Berkel chasing hard right into transition.

Still nursing his foot injury, Amberger pulled the pin on the run course. He said, “No pain on the run, it was just a precautionary pull-out. I hope it was the right decision considering Beijing International Triathlon next week. After Beijing I should be good to get stuck into some gnarly training for the back half of the year, pumped to race through until December.”

Bozzone wrapped up three weekends of racing in three different countries with a third place finish after battling McKenzie in a sprint for second place. The four-time world champion is now looking forward to spending time with family including his brother Dino who raced his first 70.3 event at the Sunshine Coast.

Luke Bell had to chalk this one up to a training day suffering the effects of a heavy Kona preparation, despite being at the front of the field in the early stages. “Training has been good and getting it done, just was not "fresh" enough to smack it out with those boys at that intensity. I have never raced well in lead in races and I probably should learn from that.” 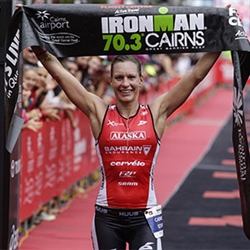 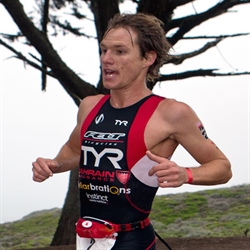 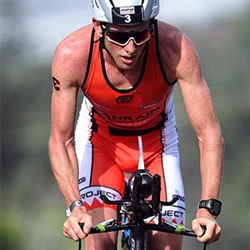