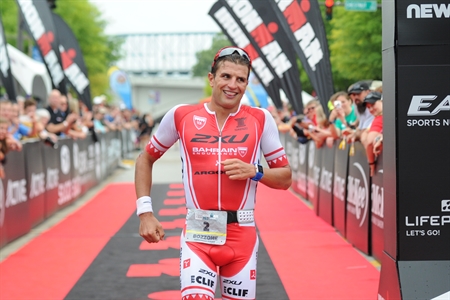 Terenzo Bozzone and Fredrik Croneborg will test their world championship form this weekend at Ironman 70.3 Budapest and Ironman 70.3 Bintan, respectively.

It is Bozzone’s first time in Hungary, and Ironman 70.3 Budapest is a last-minute tune-up before next week’s Ironman 70.3 World Championship in Zell am See, Austria. His wife Kelly gave birth to their son Cavallo four weeks ago, but this hasn’t put the brakes on Bozzone’s preparations. “It has been life-changing and a very exciting time,” Bozzone says. “Training has been going great and I am looking forward to seeing where things are at leading into the world championships.”

Croneborg is preparing for the Ironman World Championship by racing the inaugural Ironman 70.3 Bintan in Indonesia. He is no stranger to the race course, having taken third place twice at the full-distance event that was previously held on the island. He says, “Bintan is easily accessible from Phuket and it’s a nice location with hot and humid weather conditions, which I like. I hope I can do a good race there and at the same time use it as preparation for Kona.”

Zell Am See, Austria | World Championships | Ironman 70.3
add to calendar Feature Video Playlist
The IRONMAN 70.3 World Championship was created in 2006 and held in Clearwater, Florida until 2011. It then moved to Henderson, Nevada, where athletes were treated to a much more challenging course. In 2013 and 2014, the event took place in Mont-Tremblant, Quebec—its first stop on the new "global rotation" for the championship. 2015 puts the event on European soil for the first time ever, where Austria will host this epic and memorable event the day after the IRONMAN 70.3 Zell am

Budapest, Hungary | Normal Event | Ironman 70.3
add to calendar Feature Video
One of the world's most beautiful capital cities finally makes its mark on the global triathlon map.The spine of the race course is the Blue Ribbon of Europe, the river Danube, which runs along the Buda hills and the Palace District. Crossing the world famous Chain Bridge, you will pass by the most spectacular sights of the city - offering a sightseeing adventure like non the city, nor IRONMAN competitors, have seen before.