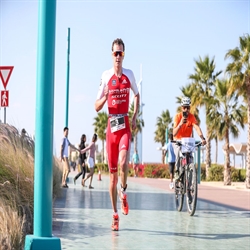 Alistair Brownlee is a two-time Olympic gold medalist, two-time ITU World Champion, and three-time European champion. He is the only person to have ever defended Olympic triathlon gold. He is also the first person to win the ITU Triathlon World Championship titles for Junior (2006), U23 (2008) and Senior (2009).

While in his first term studying medicine at Cambridge, Ali won the 2006 World Junior Championships and realized triathlon was his true passion. He moved back to Yorkshire to train full-time while earning a degree in Sports Science in Physiology.

In his first Olympics appearance in 2008, Ali was the fastest British competitor finishing in 12th. He only kept getting better: the following year he went on a rampage of wins and won his first ITU world championship.

His 2012 and 2016 Olympic gold medals cemented his status as one of the sport’s best, but he’s still got a long career ahead. While he hasn’t ruled out another Olympic campaign, Ali will be turning his attention to long-course racing and testing his mettle against the challenge of blending speed and endurance.

With a wire-to-wire win and a new course record at Ironman Western Australia, Alistair Brownlee has emphatically stamped an early ticket to the Ironman World Championship in Kona, Hawaii.
News Article